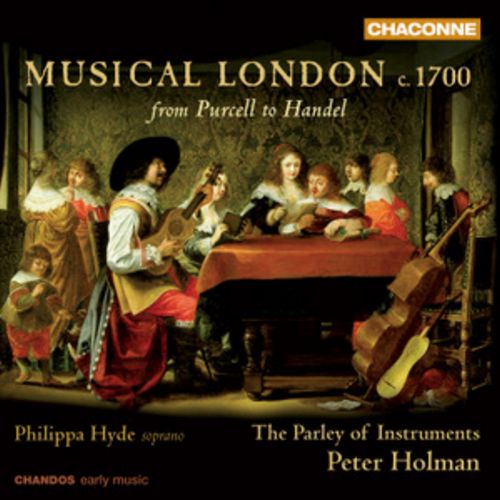 Musical London, c1700`:
Courteville:
Creep softly, purling streams
Croft:
Symphony song:
For rural and sincerer joys
Draghi:
Where art thou, God of Dreams (from Romulus and Hersilia, 1682)
Sonata in G minor
Handel:
Cantata 'Venus and Adonis', HWV 85
reconstructed by Peter Holman
Haym:
Chandos anthem:
Have mercy on me, O God
Matteis:
Suite in D minor
Pepusch:
Sonata in D major:
Smallcoal
Purcell:
Trio Sonata, for violin, bass viol and organ, Z780
reconstructed by Peter Holman
Tell me, some pitying angel (The Blessed Virgin's Expostulation), Z196
Weldon:
Suite in D minor
The late seventeenth century was a period of great change in English music. This was a time when the influences of Italian music were ever-increasing, brought to England by Italian composers such as Draghi, Haym and Matteis, and their German contemporaries Pepusch and Handel. In this new release we explore how the English composers, Purcell, Weldon and Croft, responded to Italian music and incorporated the style into their own works. The two works by Purcell, Sonata in G minor and The Blessed Virgin’s Expostulation, perfectly illustrate his mastery of the Italian style. This is especially evident in the latter, which Purcell wrote in the style of an Italian cantata.

This distinctive blend of English and Italian influences also became evident in the works of many European composers in England, as they adopted the native English style and form. In fact the English legacy can be heard in the music of Draghi, Courteville, Matteis, Handel, Pepusch and Haym, almost as clearly as in the music of their English contemporaries. Draghi’s sonata is a prime example of this, it seems to have been influenced by English consort music, and its short, contrasted sections and unexpected harmonies are far removed from the sonatas composers were writing in Italy at the time.

The works on this release are performed by Peter Holman’s early music group, The Parley of Instruments, which today is recognised as one of the leading exponents of Baroque music. The Parley’s trail-blazing work in English eighteenth-century music has led to collaborations with soloists such as Catherine Bott, Crispian Steele-Perkins and Elizabeth Wallfisch. On this release, the group is joined by soprano Philippa Hyde, with Peter Holman, conductor and founder of the Parley of Instruments.