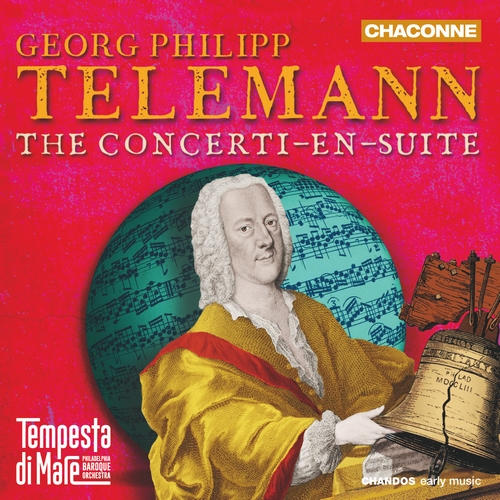 This recording is the first to bring together Telemann’s three surviving concerti-en-suite, from the intimate Concerto di camera to the more extravagant and impressive Concerto-Suites.

Like many seventeenth-century German composers referring to their national idiom as a blend of French, Italian, and German styles, Telemann, who added rustic Polish music to this stylistic soup, quickly became the standard-bearer for this ‘mixed taste’ during the early eighteenth century, writing Italian concertos with a French accent, French overtures featuring moonlighting concerto soloists, and Polish folk tunes that exuberantly dance their way into arias, concertos, sonatas, songs, and suites. One of his more interesting mixtures is the concerto-suite, a subgenre in which a soloist is featured in an opening concerto-allegro and in a following series of French dance movements. The three surviving ones are brought together here for the first time.
Recorded at Independence Seaport Museum, Philadelphia, Pennsylvania, USA; 16 – 18 October 2017