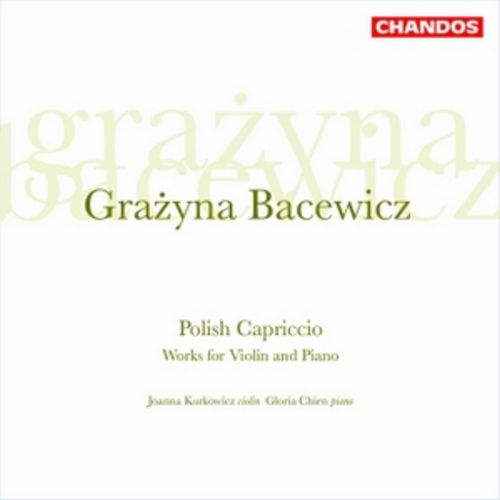 Bacewicz: Works for Violin and Piano

Grazyna Bacewicz was the most prominent Polish woman composer of the twentieth century and a renowned violinist who, by contemporary accounts, was surpassed only by Ginette Neveu and David Oistrakh. She left a legacy of over two hundred compositions, many of which have never been heard in the West.

The Oberek is a fast-paced cousin of the Mazurka, and Oberek No. 1, a popular encore piece, demonstrates the drive which characterises much of Bacewicz’s work. Her compositions also reflect the influence of her French musical training – she studied in Paris with Nadia Boulanger – with Sonata No. 4 in particular invoking strains of Debussy and Franck as well as the folk-like elements that also appear in her works. The dialogue between the instruments and the shifting of the themes from violin to piano is characteristic of Bacewicz’s writing. Throughout the sonata controlled romanticism in a neoclassical framework is contrasted with pulsating, forceful driving rhythms. Sonata No. 5 is even more dramatic in its realisation.

The Partita was written after a long hospitalisation – the result of a serious automobile accident. Although Bacewicz’s body was immobilised, her musical mind must have been very active. She provided two versions of the work, one for orchestra and the second for violin and piano which we hear on this recording. The Sonata for Violin Solo demonstrates Bacewicz’s exploration of new musical forms and contains a subtlety of dynamics and experimental bowing techniques. The two final works on this recording, Capriccio for violin and piano and Polish Capriccio for solo violin, show off the violin technique of both composer and performer, and in this Bacewicz follows an historic legacy from Paganini to Wieniawski, Joachim to Ysaye and beyond.

This is music which demands disciplined virtuosity, such as Joanna Kurkowicz has in spades; Gloria Chien is the attentive pianist. Interpretively, they find more here than did Wieslawa Szymczynska and Benedicte Haid, and are accorded appropriately ‘up-front’ sound. Those keen to investigate a not inconsiderable composer could profitably start here.

'Kurkowicz appears to have all the answers. She could ask for no more sensitive or supportive an accompanist than one-time Russell Sherman pupil Gloria Chen, and the recording typically combines Chandos' virtues of bold, tangible engineering set against a warm acoustic. Recommended.'