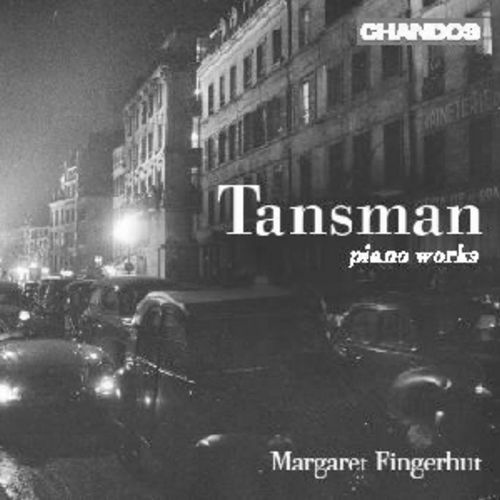 Mazurkas Vol 1 “Recueil de Mazurkas”
Sonata No 1 “Sonata rustica”
Sontina No 3
3 Blues Preludes
Four Nocturnes for piano (1952)
Album des Amis
Chandos has been attentive in promoting the orchestral works of Alexandre Tansman, who due to the vagaries of fashion has to a great extent been ignored. We now embark on the piano music and a deeply personal project for soloist Margaret Fingerhut. ‘My curiosity about the piano music of Tansman began over 20 years ago when I encountered the delightfully languid Berceuse he wrote for the album of Hommages to Roussel, and which I recorded for Chandos. The fact that he was born in Lodz, Poland, where my great-grandparents also came from, spurred me on to find out more about him, and since then I have been assiduously collecting his piano works - quite a task as it turns out that in the course of his long composing career Tansman was nothing if not prolific!’

‘I feel his music deserves to be revalued and heard by a new generation of listeners, and so I wanted to create a CD to present an overview of his unique style and musical language. While the influences of Ravel, Poulenc, Milhaud and Stravinsky are apparent, along with jazz-inspired techniques, he himself professed his music to be rooted in his native Polish culture. So the starting point for this disc had to be his Mazurkas – after all, he wrote more of them than almost any other composer except for that other famous Polish exile-in-Paris, Chopin! Listen to his 2nd Mazurka to be transported to a world filled with gentle sweet melancholy. For me his piano music abounds in lyrical expression, tenderness, elegance, grace, good humour and exuberant virtuosity (he loved writing on three staves with huge leaps at great speed!). It seems such a shame that the forces of dogma and experimentalism which ruled Paris since the Second World War left so many casualties in their wake, composers like Tansman who determinedly stuck with neoclassicism and who were not afraid of melody. It is my hope that his individual voice can speak to us afresh’.