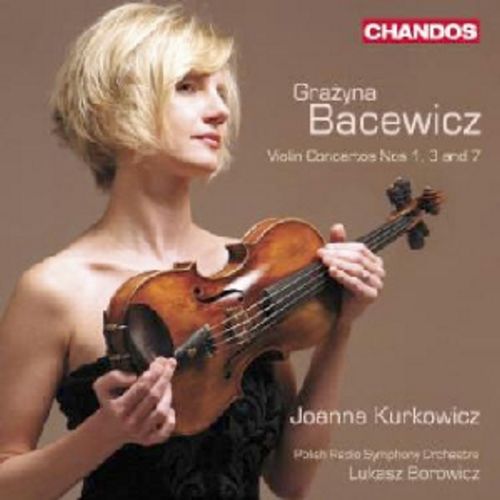 The Polish-born violinist Joanna Kurkowicz has previously made a rare recording of Bacewicz’s works for violin and piano on Chandos; which was enthusiastically received. ‘This is music which demand disciplined virtuosity, such as Joanna Kurkowicz has in spades”, wrote Gramophone, while American Record Guide commented, ‘Lovers of fiddle music really can’t have too much of Grazyna Bacewicz’.

Joanna Kurkowicz writes on the current project: ‘For me personally, this recording project is a celebration of a supremely talented composer… My sincere hope is that generations of violinists, teachers and critics will be attracted to Grazyna Bacewicz’s ouvre – especially the violin concertos – and that the quality and originality of Bacewicz’s works will secure them the acclaim they so richly deserve, and their rightful place among the masterpieces of the repertoire.’ About the repertoire on this disc she says: ‘The idea of the present recording, of bringing together Violin Concertos Nos 1, 3 and 7, came to me after the simple realisation that these fabulous works for violin belong among the masterpieces of the violin repertoire… Written by a violinist who knew the technical challenges of the instrument, these works are indeed difficult. But at the same time they seem natural and convey musical ideas with absolute clarity… [Bacewicz’s] choices of sonorities, articulations, tempos – even fingerings – in the musical text suggest a deep understanding of the instrument, which draws me even closer to [the] music.

"All performances on this cd are excellent and inspired. The soloist was evidently very much engaged in this project (also clear from her very interesting notes in the booklet), and the fact that Chandos took nine(!) days to record it makes clear that they also did everything to make it a success!. The Polish engineers made a beautiful, clear and transparant recording . I would very much like to hear Joanna Kurkowicz in the already mentioned Szymanowski concerts: on this cd she convinces with an impeccable technique, beautiful tone, an enormous variety in tone-colours and a performance that forces you to listen! And that is an extraordinary achievement in these very difficult works. This cd is a winner in all respects: wonderful, unknown repertoire in sublime performances, beautifully recorded with interesting notes in the booklet. Just go and buy it! "

“…Kurkowicz sets a standard for committed playing that will be difficult to match, let alone beat. Recommended.”

“Bravo to Joanna Kurkowicz, the fine Polish Radio Symphony under Lukasz Borowicz, and Chandos for rescuing these treasures from undeserved neglect.”

“Concertos from a strong personality at contrasting stages of her career. …. The value and originality of what she (Bacewicz) did achieve is very well conveyed by Joanna Kurkowicz’s polished yet passionate playing, backed to the hilt in texturally lucid recordings, made in Warsaw, by Lukasz Borowicz and the Polish Radio Symphony Orchestra."

“ I really do think that Chandos has performed a huge service to a great composer by recording these works, and the joyous performances of Kurkowicz, who is clearly enraptured by the music, are matched by the brilliant Polish Radio Symphony Orchestra under Lukasz Borowicz."