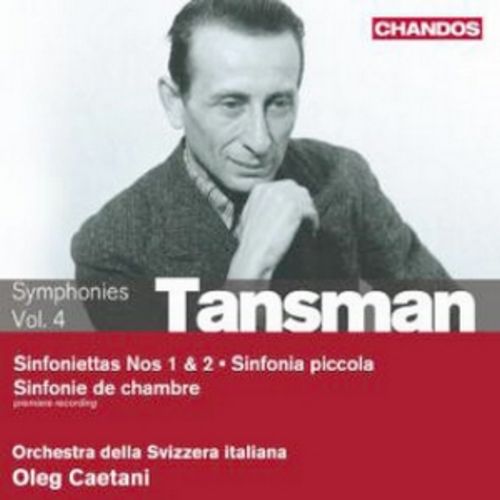 Tansman:
Symphonies Volume 4:
Symphonie de chambre
Sinfonietta No 1
Sinfonietta No 2
Sinfonia piccolo
Through his quest to revive the work of this previously much-maligned Neoclassicist composer, Oleg Caetani has become synonymous with Tansman. He once again provides us with defining interpretations in this, the fourth and final volume. The interest in this series has won Tansman many new admirers and led to more recordings of his music. International Record Review wrote of Volume 1, ‘After hearing this spectacularly engineered new SA-CD, I really do believe that Alexandre Tansman’s time has come… there’s no need to hesitate over Oleg Caetani’s performances’, while Fanfare wrote of Volume 2, ‘Oleg Caetani and his down-under musicians give this hair-raisingly impetuous but always disciplined music the strongest possible advocacy… This CD is the best possible introduction to a composer who deserves far wider exposure’. The previous volumes have all been awarded the prestigious Diapason d’or in France. With this latest instalment we are impressed to find again, a great unity of style although they were written at very different periods of his life. Sinfonietta No.1 dates back to 1924 and reveals an influence of Stravinsky, while featuring stylizations of Polish folklore. Polish writer Jaroslaw Iwaszkiewicz reported from the Paris premiere that the work includes ‘the most beautiful mazurka, an excellent scherzo, and a bravura fugue and toccata at the end.’ Scored for orchestra with single woodwinds, brass, and piano, it is dedicated to an American composer, Louis Gruenberg, who shared Tansman’s East-European roots and interests in jazz. Sinfonietta No.2 was commissioned by the Polish Radio and composed in 1978. It received its premiere as part of his 80th birthday celebrations in Poland, during the composer’s triumphant return to his homeland. The celebrations were extensive with Poland making amends for having disowned Tansman for three decades. The two Sinfoniettas are coupled by Sinfonia piccolo (1951-1952), a title which belies the scale of the composition. The Sinfonia was commissioned by the French Ministry of Education and dedicated to a famous surgeon, Dr Jean- Louis Lortat-Jacob. It adheres to a standard four-part outline of a classical symphony, and is recognised as ‘one of the most enjoyable orchestral works in Tansman’s oeuvre and the entire symphonic repertoire of the period’. The symphony’s secret may lie in the youthful exuberance of jazz, and the sonorous sheen of the Balinese gamelan. Sinfonia de chambre completes the programme in this its premiere recording. Written in 1960, the work comes from a period of stability in Tansman’s life after the war, but still reflects the turmoil of those years. The dense textures and distant echoes of Bach’s Kunst Der Fuge are among the work’s most prominent neo-Baroque features. Oleg Caetani conducts Orchestra della Svizzera italiana, an orchestra devoted to promoting international and contemporary music. Also available: CHSA 5031 – Volume 1, CHSA 5054, CHSA 5065.