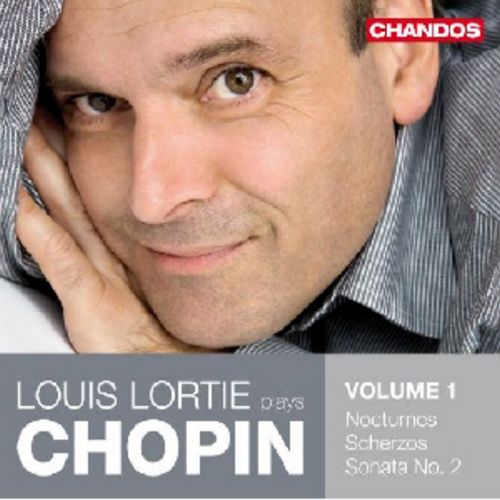 ‘In the era of the great romantic pianists, it used to be the fashion at piano recitals to offer an improvisation in the same key as that of the piece that was scheduled to follow, in order to get the audience ‘in the mood’. To compensate for this lost art, I have thought of always playing one of the nocturnes before a major piano composition by Chopin. It makes these nocturnes appear more like an improvisation, to serve as counterweight to the very dense content of the Ballades, Scherzos, and Sonatas. This practice transfers smoothly the logic of a piano recital to a CD and makes more sense by allowing the listener to enjoy the contents in one stretch’ writes Louis Lortie on his concept for the album. The immensely respected French-Canadian virtuoso Louis Lortie celebrates the Chopin anniversary with an album of Nocturnes and Scherzos for solo piano, concluded with the famous Sonata in B flat minor, often referred to as the Funeral March. These works stretch the pianist’s technique in every possible way. Louis Lortie has long had an association with Chandos, and is recognised as one of the finest interpreters of Chopin. He first recorded Chopin’s Études for Chandos more than 20 years ago; it was named as one of the ‘50 great performances by superlative pianists’ by BBC Music Magazine. Since then he’s enjoyed an exceptionally rich performing and recording career. He’s been named an Officer of the Order of Canada, and a Knight of the National Order of Quebec. A recent performance at Carnegie Hall elicited the following review, ‘Those who bought a ticket to hear Louis Lortie play on Saturday night must have been extremely glad they did so. The pianist from Montreal gave a recital at Carnegie Hall that was filled with beauty, brains, and virtuosity.’ Louis Lortie will perform Chopin at the Queen Elizabeth Hall on Monday 23 November.