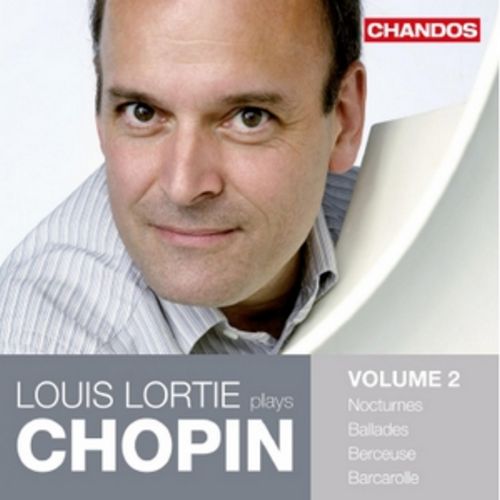 Nocturnes Op. 9 No. 2, Op. 15 No. 1, Op. 15 No. 2, Op. 15 No. 3, Op. 48 No. 1, Op. 55 No. 1
Ballades Op. 23, Op. 38, Op. 47, Op. 52
Berceuse Op. 57
Barcarolle Op. 60
This is Volume 2 in our series of solo piano works by Chopin, played by the French-Canadian pianist Louis Lortie. Recording exclusively for Chandos, Lortie is recognised as one of the finest interpreters of Chopin today. He first recorded Chopin’s Études for Chandos more than twenty years ago; the disc was named as one of the ‘50 great performances by superlative pianists’ by BBC Music. Volume 1 of his current Chopin series also has received excellent reviews: the magazine Pianist wrote: ‘He is a pianist of our time when it comes to speed, energy and an unfussy approach to Chopin. His way of playing is like a sharply cut steel sculpture, super elegant and with not one single smudge.’ And in the words of International Piano: ‘These are full-blooded and eloquent performances, an auspicious start to what looks likely to become one of the finest of Chopin surveys.’

The ballade was associated with French poetry up until the mid-nineteenth century, when Chopin was among the first to transform the genre into a purely musical form for solo piano. His four ballades, recorded here, are among his most extraordinary and powerful works, full of dramatic contrasts, with moments of lyrical tenderness followed by passages of rambunctious energy.

The Irish composer John Field invented the piano nocturne as a lyrical and dreamy short piece, a charming and languorous creation that was later transformed and extended by Chopin into something with a much wider emotional range, and a general sense of wistfulness. This ‘Chopin’ style of nocturne soon came to replace the Fieldian style as the preferred model of the genre. The simplicity and directness of expression found in the nocturnes have made them the most popular of all Chopin’s works.

Composed towards the end of his life, the Barcarolle (originally a Venetian gondolier’s song) for solo piano is a melancholy, but sweepingly romantic work that conjures up strong images of Venetian boats, water, and oars. Also on this disc is the Berceuse (inspired by the traditional mood of the lullaby), based around a single four-bar theme which Chopin ornaments in increasingly elaborate ways as the piece develops.
CHAN 10588 Louis Lortie, Chopin, Vol. 1