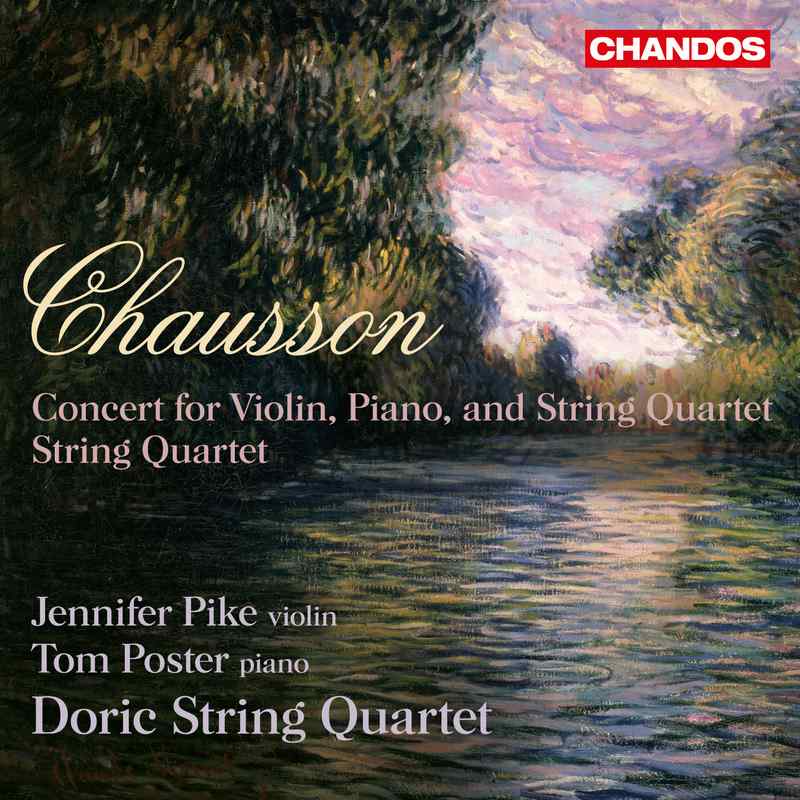 Concert in D major for violin, piano, and string quartet, Op. 21
String Quartet in C minor, Op. 35 (completed by Vincent d’Indy)
This is the sixth recording by the Doric String Quartet for Chandos Records, and the discography is going from strength to strength. The disc of Schumann’s String Quartets, Op. 41 was ‘Recording of the Month’ simultaneously in BBC Music and Gramophone, and nominated for a Gramophone Award in the Chamber Music category in 2012.

The Quartet here turns to the French composer Ernest Chausson. The work of this composer is deeply individual, but it does reflect some technical influences of Wagner too, and of César Franck, his other musical hero. In general, Chausson’s compositional style bridges the gap between the ripe romanticism of Massenet and Franck, and the more introverted impressionism of Debussy.

The String Quartet in C minor was the last piece on which Chausson would ever work. He had fully scored all but part of the third and last movement when in 1899, at the age of forty-four, he suffered a fatal bicycle accident – in fact, he was engaged in writing the last movement on the very day of his accident. Relying on the drafts left behind by the composer, Vincent d’Indy completed the final movement at the request of Chausson’s family.

‘Never have I had such a success! I can’t get over it. Everyone seems to love the Concert.’ These are the words that Chausson, clearly elated, wrote in his diary after the first performance, in 1892, of his Concert in D major for violin, piano, and string quartet. The work is a model of cohesion, with strong ideas and melodies of great impact. Indeed, the autograph manuscript is covered with alterations and crossings-out, a sign of the composer’s drive towards absolute perfection in this masterpiece of chamber music.

In the Concert, the Doric String Quartet shares the stage with another exclusive Chandos artist, Jennifer Pike, who in 2002, at the age of twelve, notably became the youngest-ever winner of the BBC Young Musician of the Year competition. She has given performances throughout the UK and abroad and, now aged just twenty-three, is widely regarded as one of the finest violinists in Britain. Tom Poster is internationally recognised as a pianist of outstanding artistry and versatility, equally in demand as a soloist and as a chamber musician across an unusually extensive repertoire.