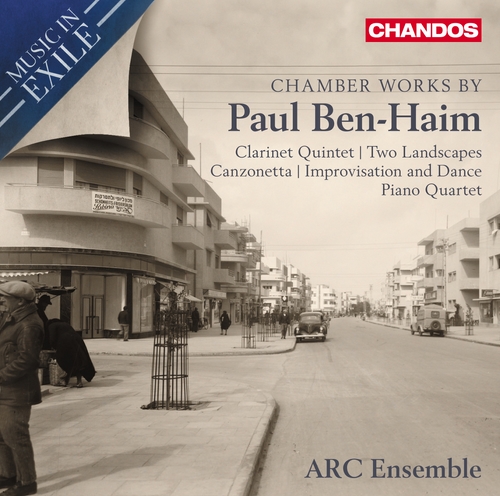 Piano Quartet, Op. 4
Two Landscapes, Op. 27
Improvisation and Dance, Op. 30
Clarinet Quintet, Op. 31a
Canzonetta, Op. 34 No. 4
This is Volume 1 in a new chamber series which explores the music of composers who were forced to flee Europe during the 1930s. The survey begins with works by the German-born Jewish composer Paul Ben-Haim (né Frankenburger) who immigrated to Palestine in October 1933. Ben-Haim was an accomplished pianist, conductor, choral coach, and composer who made a significant cultural contribution to his adoptive country. The list of musicians who commissioned, performed, and recorded his music includes Yehudi Menuhin, Itzhak Perlman, Menahem Pressler, and Leonard Bernstein. Among the Israeli composers he taught are Eliahu Inbal, Avraham Sternklar, Noam Sheriff, and Shulamit Ran

The Piano Quartet was completed in Munich during the summer of 1921, long before any thought of emigration. Until the ARC Ensemble’s performance of the work in 2012, it had not been played since a broadcast in July 1932. It it strongly rooted in the music of Brahms, Strauss, Reger, and Fauré, whilst retaining Ben-Haim’s own strength of ideas, sense of form, and bold, confident use of colour.

By the late 1930s / early 1940s, Ben-Haim’s musical language had adapted to life in Palestine, and we find strong Hebraic elements scattered throughout both the Two Landscapes and Improvisation and Dance. The ‘Canzonetta’ is the fourth of the composer’s Five Pieces for Piano, and a direct descendent of the nineteenth century’s Song without Words.

The amalgamation of Eastern and Western influences in Ben-Haim’s life are beautifully realised in the Clarinet Quintet. While the European technique originates in the two mainstays of the clarinet’s chamber repertoire, the quintets by Brahms and Mozart, the ‘Capriccio’ in the Scherzo is a complete quotation of ‘Elohei Tzidki’ (God of my righteousness), a traditional hymn. ‘I was very satisfied,’ wrote the composer, ‘because I felt that I had succeeded in consolidating a new style.’

Over the last ten years the ARC Ensemble (Artists of The Royal Conservatory, Toronto) has become one of Canada’s pre-eminent cultural ambassadors, raising international appreciation of The Royal Conservatory and Canada’s rich musical life. Its first two CDs, On the Threshold of Hope and Right through the Bone (devoted respectively to the music of Mieczysław Weinberg and Julius Röntgen), were both nominated for Grammy Awards in the ‘Best Chamber Music Recording’ category. Its recordings enjoy regular airplay around the world, and its concerts have been broadcast on CBC Radio, National Public Radio in the US, and on public radio throughout Europe.