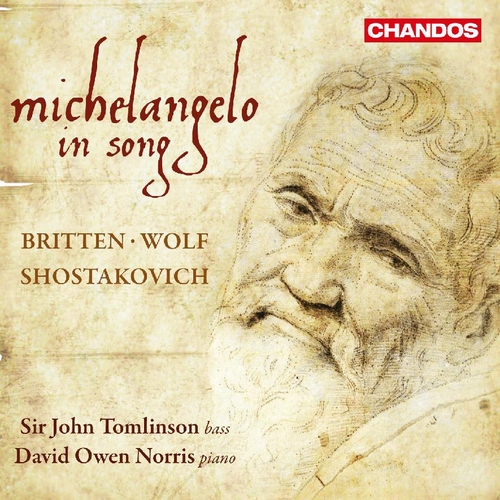 Dmitri Shostakovich:
Suite on Verses of Michelangelo Buonarroti, Op. 145
When the name of Michelangelo comes up in conversation it is usually in connection with such undisputed masterpieces as the statue of David in front of the Palazzo Vecchio in Florence (the original now in the Accedemia gallery), or the legendary ceiling dome of the Sistine Chapel at the St Peter’s Basilica in Rome. What fewer people might know is that Michelangelo also wrote a great number of poems, including madrigals and sonnets, some of which were set to music by such illustrious composers as Benjamin Britten, Hugo Wolf, and Dmitri Shostakovich. The internationally acclaimed bass Sir John Tomlinson and pianist David Owen Norris have performed these songs at their Michelangelo evenings on many occasions. At these events the sixteenth-century Michelangelo is portrayed by Tomlinson in updated form, as a nineteenth-century painter in his workshop, looking over his old papers and poems, and reliving each one in turn. The singer explains that the idea was inspired in part by his many years of playing historical characters on the opera stage, and partly by his seeing, at a London exhibition in 2010, the actual pieces of paper upon which the sculptor himself had written out some of his poems – an encounter he describes as ‘Extraordinary!’ Shostakovich felt strongly that Michelangelo’s poetry transcended its Italian roots to have a universal appeal, and that it embraced ‘profound philosophical ideas, humanism, and penetrating reflections of love and art’. For the Suite on Verses of Michelangelo Buonarroti, the composer selected eight of Michelangelo’s sonnets and three other poems, all in Russian translations, covering the principal subject areas of wisdom, love, creativity, death, and immortality. The Seven Sonnets of Michelangelo was the first song-cycle that Britten composed specifically with the voice of his partner, Peter Pears, in mind. At the time, Britten was consciously broadening his musical horizons in an attempt to free himself from his English roots. He did this in part by setting foreign-language text to music. The resulting love songs recorded here are passionate, ecstatic, almost evangelical in tone. Drei Gedichte von Michelangelo, based on poems about the joy and pain of love and youth, and the brevity of life, were among the last compositions written by Hugo Wolf, before his descent into mental illness. He had originally envisioned that these settings would become the beginning of a large-scale portrait of the poet, but sadly this project never materialised.