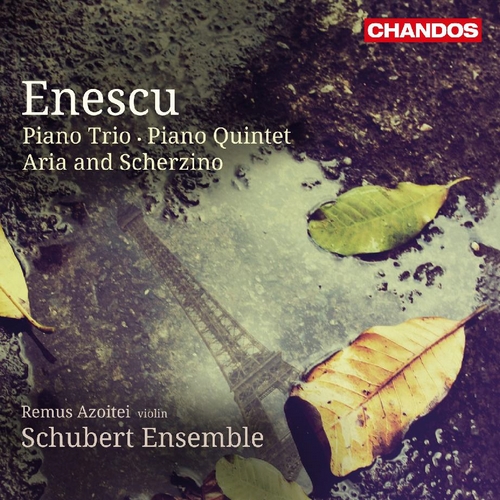 Piano Trio in A minor
Piano Quintet in A minor, Op. 29
Aria and Scherzino for violin, viola, cello, double-bass, and piano
In addition to being a world-class violinist, pianist, conductor, and teacher, George Enescu was a well-renowned composer. In fact, his most celebrated violin pupil, Yehudi Menuhin, made the prediction that Enescu’s compositions would become ‘one of the great discoveries of the twenty-first century’, and, indeed, in recent years Enescu’s works have become more widely performed. This is the Schubert Ensemble’s second disc devoted to works by Enescu. Classic FM magazine wrote of the preceding volume: ‘The Schubert Ensemble can be applauded to the skies for bringing Enescu’s ridiculously neglected chamber music to the fore... excellent playing in a valuable disc that should help bring Enescu a step further towards the attention he deserves.’ The Piano Trio is one of the very few works that Enescu composed during the Second World War; however, it was not performed until years later, after it was discovered by the pianist Hilda Jerea who premiered it in 1967. After this performance the work disappeared from view for another three decades, until the Enescu authority Pascal Bentoiu presented his own in-depth edition of the work. The Schubert Ensemble planned to base this recording on Bentoiu’s edition of the score, but came to amend it in numerous ways after a close study of the composer’s heavily annotated manuscript: ‘Our admiration for Bentoiu increased as we worked, but we ended up making a large number of changes to his version, where we felt we could bring greater conviction to our performance and coherence to the piece… The end result of all this work was not an edition that we could claim is in any way definitive, and even necessarily an improvement on Bentoiu’s, but one that is our own and which helped us to feel more in touch with the piece and to bring greater conviction to our performance of it.’ Also on this disc, we find the brief Aria and Scherzino for violin, viola, cello, double-bass, and piano, and the Piano Quintet which, like the Piano Trio, was left unperformed for the duration of the composer’s lifetime. This work is inspired partly by folkdances, and partly by the compositional style of Enescu’s teacher, Gabriel Fauré. The Schubert Ensemble has established itself over the last thirty years as one of the world’s leading exponents of music for piano and strings. Regularly giving more than fifty concerts a year in over forty different countries, it has more than eighty commissions to its name and has recorded more than thirty critically acclaimed CDs, many of them with Chandos Records.