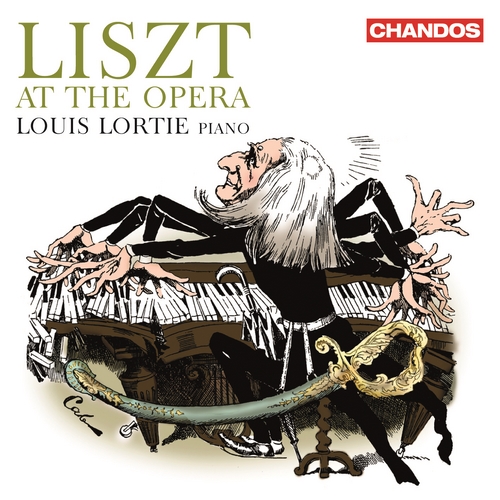 Liszt: Liszt at the Opera - Transcriptions of works by Wagner

Transcriptions of works by Wagner, Richard (1813-1883):
Overture, Recitative and ‘Evening Star’Aria from ‘Tannhäuser’
Prelude and ‘Liebestod’ from ‘Tristan und Isolde’
Spinning Chorus from ‘Der fliegende Holländer’
In this new release, the exclusive Chandos artist and award-winning pianist, Louis Lortie continues his critically acclaimed exploration of piano works by Liszt, turning his hand to opera transcriptions, paraphrases, and fantasies that revolutionised composition for the piano with their unheralded technical innovation.

In Réminiscences de ‘Don Juan’, based on three scenes from Mozart’s Don Giovanni, Liszt creates a work renowned for its extreme technical difficulty. He dazzled audiences in his own time with performances of it, and it has remained notorious ever since, Ferruccio Busoni claiming that ‘this piece among pianists has acquired the almost symbolic significance of a pianistic summit’.

The Paraphrase de concert on Rigoletto is one of three Verdi paraphrases only published in 1960, each of which concentrates on one particular moment of its respective Verdi opera, presenting it in highly pianistic terms whilst maintaining the general lines of the original. In the Rigoletto paraphrase Liszt focuses on the aria ‘Bella figlia dell’amore’.

In the Valse de l’opéra ‘Faust’ de Gounod Liszt cleverly combines the waltz from Act I of the opera with a melodious love duet from Act II. After these materials have been transformed and Liszt has added his own musical tangents, the piece accelerates into a vertiginous whirl, reminiscent of Ravel’s much later La Valse, and finally the main theme reappears with majestic swagger and grandeur.

Completing the disc are several more or less straightforward transcriptions based on operas by Richard Wagner who, despite a rocky start to their relationship, forged a close musical bond with Liszt. Among these transcriptions is the popular ‘Liebestod’ from Tristan und Isolde. Liszt never completed a transcription of its natural musical companion, the Prelude to the same opera, so here Louis Lortie has recorded his own arrangement of that piece.
In this new release, the exclusive Chandos artist and award-winning pianist, Louis Lortie continues his critically acclaimed exploration of piano works by Liszt, turning his hand to opera transcriptions, paraphrases, and fantasies that revolutionised comp