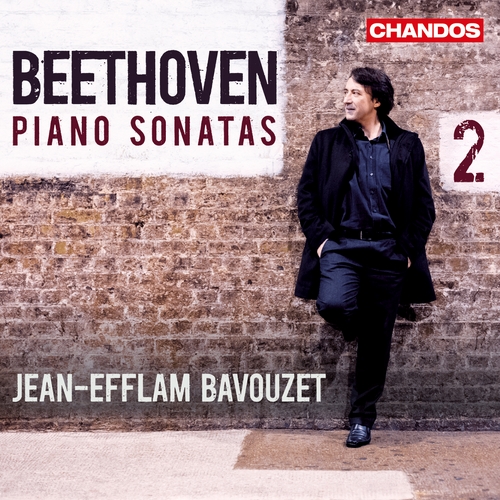 Op. 31 No. 1 in G major, No. 2 in D minor, No. 3 in E flat major
Op. 49 No. 1 in G minor, No. 2 in G major
Op. 53 in C major ‘Waldstein’
Andante favori in F major, WoO 57
Jean-Efflam Bavouzet returns for the second volume of his survey of Beethoven’s Piano Sonatas. The project, set to conclude with Vol. 3 in 2014, runs alongside his complete recording of Haydn’s Piano Sonatas. Vol. 1 of the Beethoven series was critically acclaimed, BBC Music calling the performances ‘distinguished and virtuosic’ and Fanfare remarking that ‘his readings will withstand the test of time’. In this release Bavouzet performs the sonatas published between 1800 and 1804. This period marked a transitional stage in Beethoven’s work and the arrival of his middle period. Included are the two Op. 27 sonatas, both modified ‘quasi una fantasia’ that break away from traditional forms. One of these, the ‘Moonlight’ Sonata, features one of his best-known movements, the opening Adagio sostenuto, which unfolds like a baroque prelude with its famous rolling triplets and lamenting melody. The ‘Waldstein’ Sonata, Op. 53 is one of the glories of Beethoven’s middle period and surpasses all his previous sonatas in scope and scale. Also recorded here is the Andante in F, a piece originally intended as the slow movement to the ‘Waldstein’. Although later replaced by a shorter Adagio molto this is a charming piece in its own right and quickly became one of Beethoven’s most popular works after being published alone as the Andante favori.