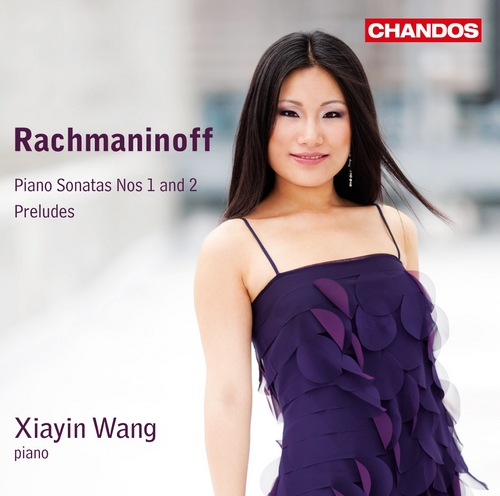 Piano Sonatas Nos 1 and 2 (revised version)
Preludes, Op. 23 Nos 4, 5, and 6
Xiayin Wang presents her second disc of piano works by Rachmaninoff, playing the two piano sonatas alongside three of the Op. 23 Preludes. She impressed with the first volume, Gramophone remarking that it featured ‘playing of an awesome clarity and poise’ (Gramophone Choice).

Piano Sonata No. 1 from 1908 was originally inspired by Goethe’s Faust, and follows the model of Eine Faust- Symphonie by Liszt. Although Rachmaninoff abandoned any explicit references soon after starting the Sonata, the influence of Liszt’s work can be heard in its grand three-movement structure and complex emotional trajectory. The symphonic proportions of the first sonata contrast with the compact 1931 revision of Piano Sonata No. 2, which Xiayin Wang performs here. Rachmaninoff cut some 120 bars from the original as well as toning down some virtuosic extravagances and creating clearer textures. Despite this apparent modesty, the rhapsodic expression and emotional breadth so characteristic of Rachmaninoff are abundant in the sonata.

Three miniature masterpieces from Rachmaninoff’s first, Op. 23 set of preludes complete the disc. No. 4 in D major is a pure Andante cantabile while No. 5, one of Rachmaninoff’s best-known works, is a striding march. No. 6 in E flat major offers another reverie which effectively returns us to the calm of the D major prelude.