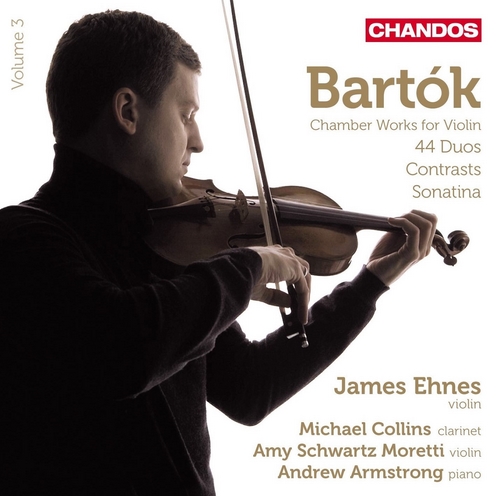 44 Duos‡
Contrasts†
Sonatina (arr. Gertler)*
James Ehnes presents his third disc of chamber works by Bartók. The previous volumes have, along with his outstanding concerto disc, established his formidable reputation as a Bartók interpreter. Here Ehnes is joined by the pianist Andrew Armstrong, violinist Amy Schwartz Moretti, and Michael Collins, one of the world’s leading clarinettists.

The Sonatina, originally composed in 1915 for piano, was based on melodies which Bartók had collected during expeditions in Transylvania. The transcription for violin and piano heard here was produced ten years later by a young student of Bartók’s, Endre Gertler.

Bartók composed Contrasts in 1938 for the jazz clarinettist Benny Goodman and violinist Joseph Szigeti, who originally had requested a work in two movements, each with a cadenza for one of the featured instruments. Fulfilling this request, Bartók added a central slow movement, entitled ‘Pihenő’ (Relaxation). The opening movement, ‘Verbunkos’, alludes to a march-like Hungarian military recruiting dance. The finale, entitled ‘Sebes’ (Quick), is a lively romp at the heart of which lies an unexpected episode of haunting calmness.

Besides writing for such outstanding musicians as Szigeti and Goodman, Bartók composed a lot of music for students, including the Forty-four Duos for two violins recorded here. These short pieces take material from a remarkably wide array of folk traditions and interlink the styles and culture of diverse peoples.