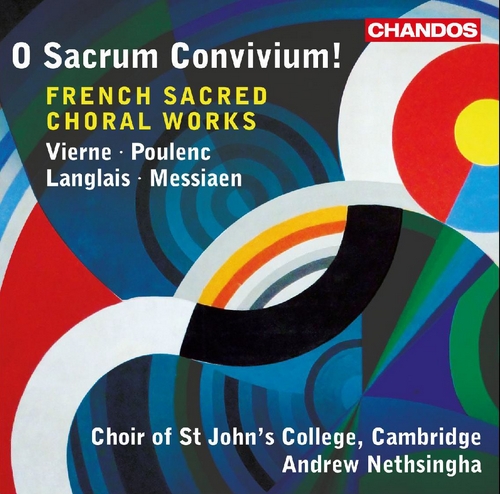 Olivier Messiaen:
O sacrum convivium!
This new disc with the Choir of St John’s College, Cambridge under Andrew Nethsingha – recording exclusively for Chandos – pays homage to French sacred choral music of the early twentieth century. It features two Messes solennelles, by Louis Vierne and Jean Langlais, as well as short pieces by Francis Poulenc and Olivier Messiaen. The two Messes solennelles in many ways emulate the Mass in F sharp minor, Op. 36 by Vierne’s organ teacher, Charles-Marie Widor. Yet, Vierne and Langlais – both blind from childhood, Paris Conservatoire students, and longstanding titular organists in main places of worship in Paris – use a more modern, forward-looking chromatic harmonic language and colourful organ writing. The versions heard here employ one organ, rather than the two commonly available in Parisian churches. Although it is his only published contribution to liturgical choral music, the motet O sacrum convivium! by Messiaen features two of his most characteristic musical traits: the use of chromatic harmonies within the much-favoured tonality of F sharp major, and the rhythmic augmentation of note values to liberate the music from the regular succession of beats. As well as the Four Lenten Motets by Poulenc we hear his late four short prayers ‘by St Francis of Assisi’, composed for a male choir of tenors and yet showing a remarkable variety of colour, the number of parts ranging from three to six.