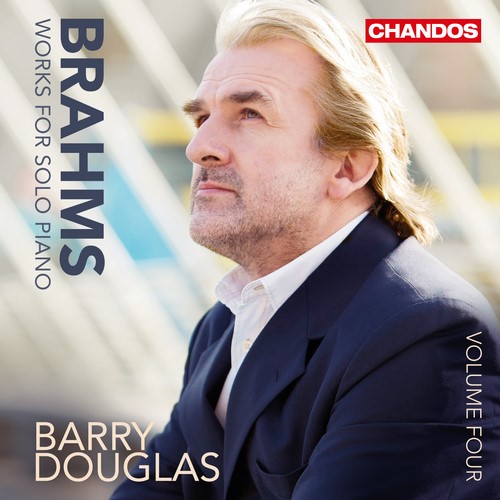 Variations on a Theme by Niccolo
Paganini, Op. 35, Book 1
Ballade, Op. 10 No. 1 ‘Edward’
Klavierstücke, Op. 76 Nos 1, 2, and 6
Variations on a Theme by Robert
Schumann, Op. 9
Klavierstück, Op. 119 No. 2
Intermezzo, Op. 117 No. 3
Sonata No. 1 in C major, Op. 1
This is Volume 4 in Barry Douglas’s monumental project to record the complete works for solo piano by Johannes Brahms. Each volume has been released to critical acclaim, the first one, in 2012, being seen by BBC Music as ‘a triumph of Brahmsian thought, with playing that gets right to the heart of the composer’.

Once again, the album is presented as a stand-alone recital, prominently featuring the C major Sonata, which was Brahms’s first published work. The influence on Brahms of his early romantic predecessors Beethoven and Schubert is obvious here, not only in the virtuoso demands on the performer but also in the opening, which recalls both Beethoven’s ‘Hammerklavier’ Sonata, Op. 106 and Schubert’s ‘Wanderer’ Fantasy.

Two other works are much more than simple sets of variations. The Variations on a Theme by Robert Schumann highlight the close relationship of Brahms with Schumann and his wife, Clara, to whom the work is dedicated ‘with intimate reverence’, and demonstrate Brahms’s skill at ‘thematic actualisation’, whereby latent potentialities of a theme are gradually revealed throughout the variation process. In the Variations on a Theme by Niccolo Paganini – the first of two books originally published in 1866 as ‘Keyboard Studies’ – each variation explores a distinct figural pattern or keyboard technique.

The recording also features short keyboard character pieces, abundant in the second half of the nineteenth century and especially in Brahms’s later years.