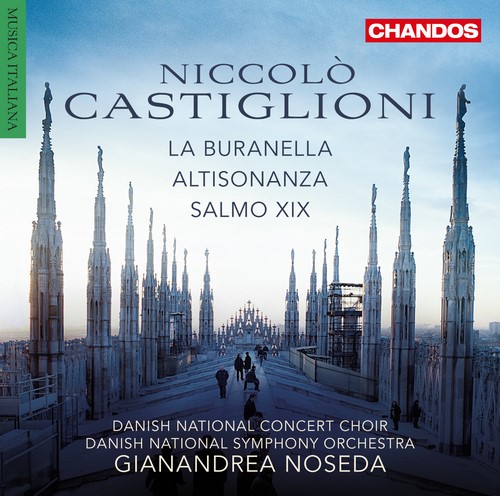 Salmo XIX*
La Buranella
Altisonanza
Conductor of the Year in the 2015 Musical America Awards, Gianandrea Noseda continues his Musica Italiana series with this recording of works by Castiglioni, with the Danish National Symphony Orchestra.

As an intellectual and an aesthete, Niccolo Castiglioni occupied a singular place in the profound renewal of Italian and European musical life of the Sixties and Seventies. Having a predilection for clear sonorities and airy, transparent textures, Castiglioni created his own unique and original artistic philosophy.

From the tonal harmony of the melodious and delicate Galuppi-inspired La Buranella (1979 – 80) to the more fragmented and experimental Altisonanza (1990 – 92), this album gives a broad insight into the various musical influences on the composer and the choices he made during his life.

Salmo XIX, employing a sort of terraced polyphony of extreme refinement, presents an unusual set of performing forces: it includes two sopranos, sung here by the coloratura Teresia Bokor – who received the Soloist Prize for 2013 at Folkoperan in Stockholm for her interpretation of The Queen of the Night – and Sine Bundgaard, a soprano at the Royal Danish Opera and Artist of the Year for Danish National Radio in 2004.