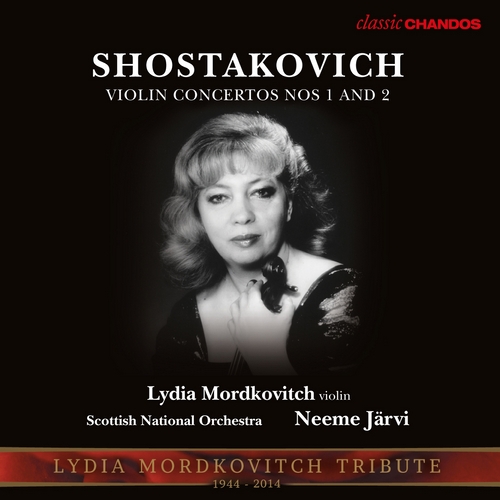 Lydia Mordkovitch was one of the founding artists of Chandos and over the years made more than sixty CDs. Her native Russia was strongly represented in her repertoire, as exemplified in her ‘mesmerising and intense’ performances of Shostakovich (The Telegraph’s obituary), heard to special effect in this album recorded at Glasgow City Hall. The original release – part of Neeme Järvi’s comprehensive Shostakovich series – won a Gramophone Award in 1990 and was highly praised by the magazine: ‘While her first is magisterial, the revelation is the under-rated Second, here shining as no other version.’

Completed in 1948, the First Concerto was written for the great Russian violinist David Oistrakh, Lydia Mordkovitch’s teacher. It was only premiered in 1955, after years of Stalinist censorship. This is a truly symphonic concerto and the musico-dramatic plan, on a grand scale, looks forward to that of the famous Symphony No. 10. The Second Concerto was completed and premiered in 1967 and also dedicated to David Oistrakh. More spare in texture and enigmatic in character, this late example of Shostakovich’s music could hardly present a sharper contrast to the First Concerto.
Re-released from CHAN 8820