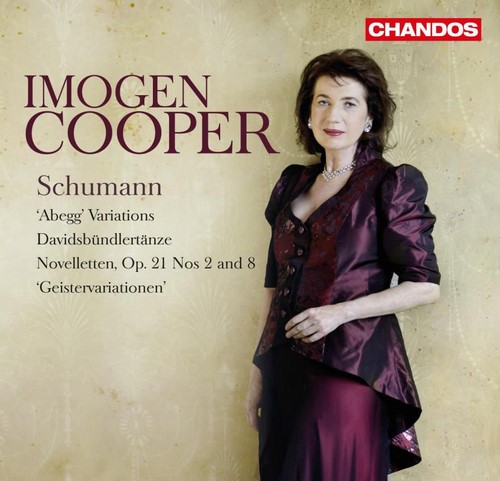 ‘Abegg’ Variations, Op. 1
Davidsbündlertänze, Op. 6
Novellette, Op. 21 No. 2 in D
Novellette, Op. 21 No. 8 in F sharp minor
‘Geistervariationen’, WoO 24, F 39
Cooper’s playing, no less lyrical, has rather the quality of a full, clear wine. It is distinctive to her, and hard to specify, but it makes her programmes deeply satisfying.

This third recording by Imogen Cooper on Chandos features some of Robert Schumann’s most characteristic and complex works for solo piano.

Cooper is one of those artists who are reaching a glorious maturity in middle age; she seems to follow in the steps of her teacher Alfred Brendel, her prodigious virtuosity coexisting with lyrical and emotional wisdom.

This album includes the Davidsbündlertänze which she describes as a ‘work of stirring beauty and humour that make it one of the great romantic masterpieces for the piano’.

It also illustrates the journey between two sets of variations: Schumann’s first published and last composed piano pieces. While the ‘Abegg’ is ‘virtuosic, extroverted, challenging to play, and charming’, the Geistervariationen are ‘introverted and sparse, with a deep but elusive emotion’.

Finally, in the two Novelletten Imogen Cooper reveals what she calls the ‘hidden narrative filaments to be discovered’ in Schumann’s music; this requires ‘a skill which is very necessary in the interpretation of scores that frequently appear disjointed and illogical’.