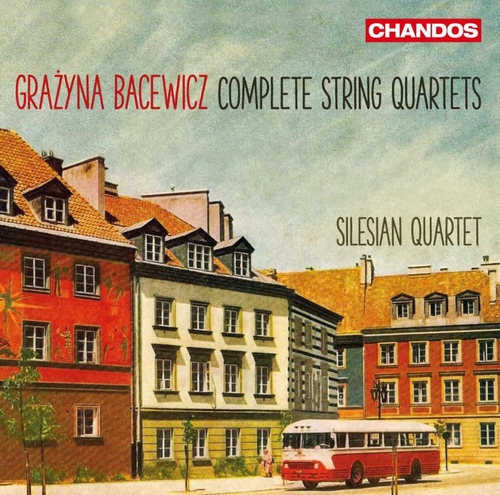 Disc 1:
String Quartets Nos 1 – 4
Disc 2:
String Quartets Nos 5 – 7
For their very first recording on Chandos, the multiaward winning Silesian Quartet presents the complete string quartets by Grażyna Bacewicz. These lesserknown chamber music treasures by the Polish composer are neatly packaged in a slimline jewel case: two discs here offered for the price of one. The life of Bacewicz, like that of better-known colleagues such as Witold Lutosławski and Andrzej Panufnik, was conditioned by the political and military events of her time. Her works reflected not only these traumas but also the shifting stylistic currents of twentieth-century music. Her seven string quartets, written between 1938 and 1965, are a telling barometer of these changes. They also stand as a timeline of her resolute compositional outlook and as a testament to her profound understanding of string instruments. String Quartet No. 1 comes after her studies in Paris in 1932 – 35 with Nadia Boulanger (composition), André Touret, and Carl Flesch (both violin), No. 2 was written in Warsaw during World War II, Nos 3, 4, and 5 date from the post-war decade, a time of socialist-realist cultural upheavals, while Nos 6 and 7 were composed during the avant-garde musical explosion that thrust Polish music onto the world stage in the late 1950s.