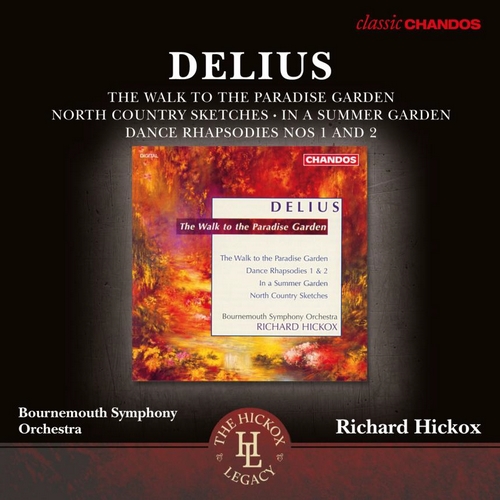 Delius: The Walk to the Paradise Garden

The Walk to the Paradise Garden
A Dance Rhapsody, No. 1
A Dance Rhapsody, No. 2
In a Summer Garden
North Country Sketches
Richly endowed with musical qualities, Richard Hickox was a great champion of neglected music in general, and of British music in particular. His sudden death in November 2008 robbed the world of a most vital, industrious, and energising musician, whose discographical legacy remains a treasure trove of the record catalogue. With the Richard Hickox Legacy we wish to express our gratitude to and appreciation of this great musical artist.

Recorded in Bournemouth in 1994, this album, highly recommended by the Penguin Guide a year later, is now re-issued at ‘classic Chandos’ price.

The Bournemouth Symphony Orchestra playing under the baton of Richard Hickox, Delius’s palette of colours shines through once again. Hickox was indeed a sensitive and flexible Delian and the Bournemouth Symphony Orchestra responded passionately to him from the start: their collaboration began with famous performances of the first ever complete cycle of Vaughan Williams’s symphonies in London.

Especially in ‘The Walk to the Paradise Garden’ – a highlight here – the collection demonstrates the glittering qualities of Delius’s enchanting musical world, which evokes an atmosphere of serene pleasure in nature.