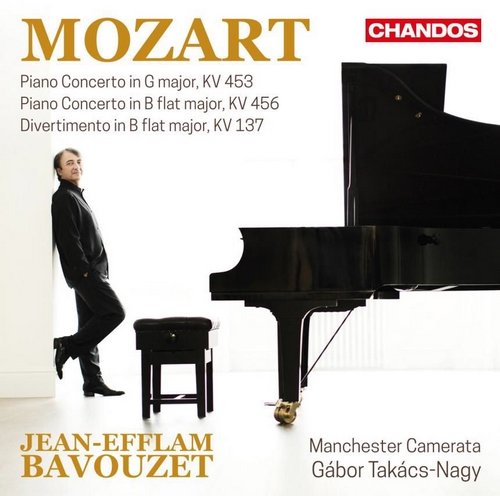 Piano Concerto in G major, KV 453
Piano Concerto in B flat major, KV 456
Divertimento in B flat major, KV 137
After demonstrating their ‘innate love and understanding of Haydn’s music in performances of the expected vivacity and insight’ (BBC Music – CHAN 10808), Bavouzet and Takács-Nagy, the latter conducting his Manchester Camerata, now explore Mozart’s extraordinarily prolific year 1784 in this new series. Two of the six concertos composed that year are heard here, each unusual for having been written by Mozart for another pianist and for featuring a central Andante, instead of the more common Adagio. This is a unique version that, as Bavouzet stresses in his booklet note, ‘although played unequivocally on modern instruments, contrasts with those versions made not so very long ago, which used a large orchestra incorporating sixteen violins and eight double-basses’. He adds: ‘a versions which also will take into account a number of performing practices current in Mozart’s time, such as the use of a solo quartet to accompany certain well-defined passages in which the piano is predominant. A version which in one way or another aims to link tradition and modernity.’