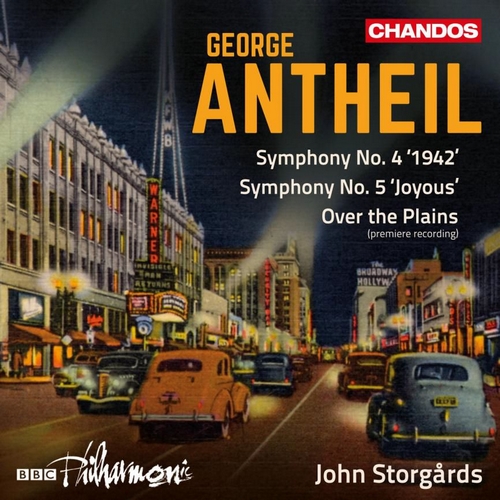 Symphony No. 4 ‘1942’
Symphony No. 5 ‘Joyous’
Over the Plains [Premiere Recording]
Alongside its ongoing much-lauded Copland series, the BBC Philharmonic embarks on a new American journey, this time with its chief guest conductor, John Storgards. Known as the ‘bad boy of music’, George Antheil began his career with a reputation as an enfant terrible, composing shockingly avant-garde works such as his ever-popular Ballet mécanique, inspired by the dynamism and dissonances of Stravinsky’s early ballets. Although he is well-established on the film music scene, too, it is his symphonic output – sampled here – that today survives in the concert hall. This new series documents the evolution of his musical style, which moved towards a fundamentally tonal and melody-based idiom, Antheil joining the growing ranks of famous US symphonists. The war-inspired Fourth Symphony and ‘joyous’ Fifth clearly represent this compositional shift, breaking with what the composer called the ‘now passé’ modernism. Also here is the premiere recording of the Texas-inspired Over the Plains, memorable for its allusions to cowboy music and offering some unexpectedly dramatic and atmospheric twists along the way.
Recording: MediaCityUK, Salford, 21 November 2015 (Over the Plains, Symphony No. 5) and 30 April 2016 (Symphony No. 4)