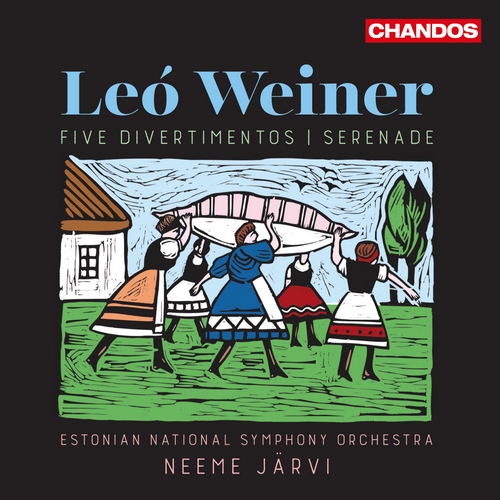 He here reveals the delightful, witty Hungarian style of Leó Weiner, who found inspiration in the music of Bartók, his near contemporary, and taught such great figures of the Hungarian musical scene as Solti and Doráti, but also Kurtág.

While ‘Hungarian style’ had been defined by Brahms and Liszt, Weiner gave it a personal slant with his clarity of scoring, featuring characterful solos for woodwinds and trumpet that have led commentators to register the influence of Bizet.

Throughout these recordings of the five Divertimentos and the Serenade, some of the works new to the catalogue, the Estonian National Symphony Orchestra and their chief conductor encapsulate the freshness and fluidity of engaging, yet too rarely performed compositions.
Recording: Estonia Concert Hall, Tallinn (taken from live performances); 9 and 10 November 2015 (Serenade, Divertimentos Nos 3 and 4), 24 March 2016 (Divertimento No. 5), and 27 – 29 June 2016 (Divertimentos Nos 1 and 2)