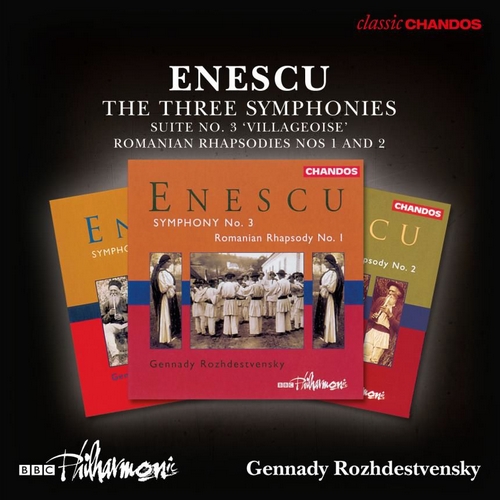 Symphony No. 1 in E flat major, Op. 13
Suite No. 3 in D major, Op. 27 Villageoise
Symphony No. 2 in A major, Op. 17
Romanian Rhapsody in D major, Op. 11 No. 2
Symphony No. 3 in C major, Op. 21
Romanian Rhapsody in A major, Op. 11 No. 1
From the Bolshoi to La Scala, from the Stockholm Philharmonic to the Vienna Symphony, the fortyfive- year career and notably famous supple stick technique of Gennady Rozhdestvensky have made him one of the most respected twentieth-century conductors in Europe. This three-CD box set at Classic Chandos price celebrates his superb Enescu series with the BBC Philharmonic. The Romanian composer was one of the most prodigiously gifted musicians of the twentieth century: a great violinist and composer, a distinguished conductor, an accomplished pianist, able cellist, and a famous violin teacher. Although relatively modest, his published output contained some substantial works, such as the folk-inspired Romanian Rhapsodies and romantically influenced symphonies, all featured here. Among the extensive discography of the conductor (more than 400 CDs), this box set will prove essential for every collector.
Reedycja. Recording: Studio 7, New Broadcasting House, Manchester; 30 September – 1 October 1995 (Symphony No. 2), 1 October 1995 (Suite No. 3), 12 and 13 June 1996 (Symphony No. 1, Romanian Rhapsodies), & 1 and 2 October 1997 (Symphony No. 3)