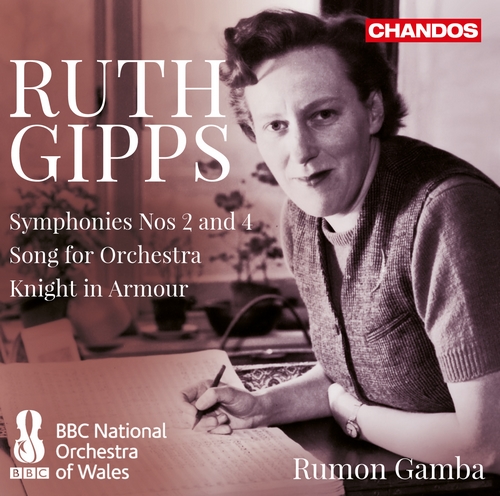 Knight in Armour, Op. 8
Symphony No. 2 in B major, Op. 30
Song for Orchestra, Op. 33
Symphony No. 4, Op. 61
The unjustly neglected and often dissident music of Ruth Gipps is with this album finding all the resonance it deserves by Rumon Gamba and the BBC National Orchestra of Wales, having already championed many British composers from the twentieth century with their series devoted to British Tone Poems and Overtures from the British Isles.

While, not surprisingly, there are echoes of the most popular composers of the time – Sibelius, Walton, and Vaughan Williams – the music is notable for its personal voice, confident conception, and vivid writing for the orchestra. Gipps herself actually felt her best works were those for orchestra.

In a programme of contrasting impressions and emotions, Symphonies Nos 2 and 4, the former inspired by the Second World War, offer an approachable tuneful idiom. They are complemented by the lyrical, shorter Song for Orchestra and the early tone poem Knight in Armour, premiered at the last Night of the Proms in 1942.
Recording: BBC Hoddinott Hall, Cardiff Bay, Cardiff; 12 – 14 February 2018