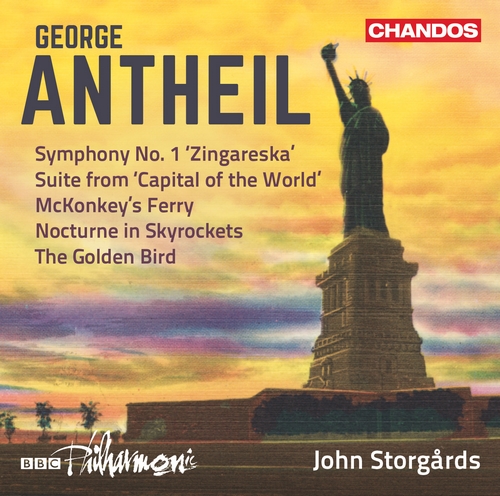 McKonkey's Ferry
Capital of the World Suite
Farruea
The Golden Bird
Nocturne in Skyrockets
Symphony No. 1 ‘Zingareska’;
In this their third volume of orchestral works of Antheil, John Storgards and the BBC Philharmonic present a collection of scores spanning the whole of Antheil’s compositional life.

Written in the early 1920s, the First Symphony is full of Antheil’s enthusiasm for the mechanical, and takes strong leads from the prevailing sound of the jazz era as well as a nostalgic look back to its predecessor, ragtime. Antheil regarded this work as ‘a young symphony with the feeling of summertime in eastern America in it’. For it he drew heavily on his experiences of his home town of Trenton, and the nearby Delaware River.

His ballet score Capital of the World dates from the mid-1950s, and was based on a short story by Hemmingway.

The Golden Bird was originally conceived as a solo piano piece, and in his translation of the piece from piano to orchestra Antheil demonstrates an ability equal to Ravel’s to think simultaneously in two musical media.

The concert overture McKonkey’s Ferry is based on a painting of George Washington and his continental army crossing the Delaware River at Christmas 1776 at McKonkey’s Ferry, near Trenton – an event that proved a turning point in the Revolutionary war.
Recording: MediaCityUK, Salford; 31 May (The Golden Bird, Symphony No. 1) and 1 June (other works) 2018