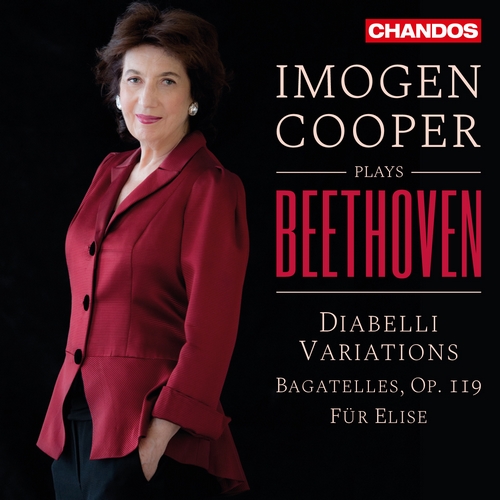 Eleven Bagatelles, Op. 119
Thirty-three Variations in C major on a Waltz by Anton Diabelli, Op. 120
Bagatelle in A minor, WoO 59 ‘Für Elise’
Regarded as one of the finest interpreters of classical and romantic repertoire, Imogen Cooper is internationally renowned for her virtuosity and lyricism. This recording is her sixth release on Chandos Records, following earlier discs of works by Liszt, Wagner, Brahms, Chopin, and Robert and Clara Schumann.

Imogen Cooper writes: ‘Beethoven’s Diabelli Variations are rightly considered to be among the greatest works for solo piano ever composed, by Beethoven or anyone else. It is incontrovertible that there is not one superfluous note in this huge masterpiece – each variation is flawless in construction and imagination, and in depth of characterisation. The breadth of ideas is limitless. Each variation tells a whole story, and for all that some are connected in mood, it is no mean feat as a performer to respect the huge scope of Beethoven’s vision.’