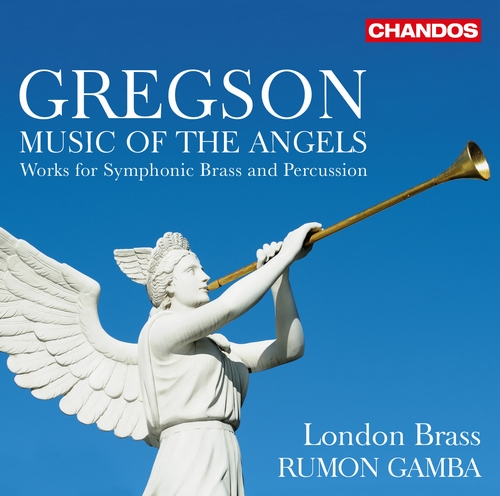 Gregson: Music of the Angels – Works for Symphonic Brass and Percussion

Fanfare for a New Era
Symphony in two movements
Three Dance Episodes
Flourish for an Occasion
Fanfare for PL
Quintet for Brass
Aria for Philip
Music of the Angels
Edward Gregson began composing from a very early age, and his extensive output covers a wide range of musical sound-worlds. Music for film, television, and theatre sits alongside choral pieces and works for full orchestra. Having played in a brass band as a teenager, he has shown a special affinity in his compositions for brass throughout his career – both for brass band and for symphonic brass, which we celebrate with this new album. His seminal Quintet for Brass, Three Dance Episodes, and Aria for Philip mark his connection to the Philip Jones Brass Ensemble. The album includes Fanfare for PL and Fanfare for a New Era, complementing his two largest-scale works for brass: the Symphony in two movements, and Music of the Angels. Virtuosic playing from London Brass under the direction of Rumon Gamba makes this an essential tribute to Gregson in his seventy-fifth year.
Recording: Henry Wood Hall, London; 20 and 21 June 2019.