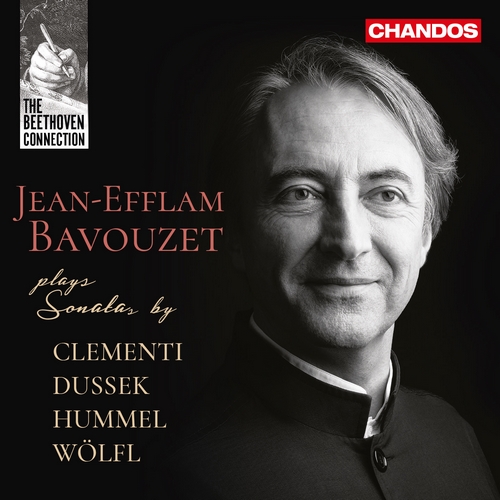 Musical illustrations
In the 250th Beethoven anniversary year, Jean-Efflam Bavouzet has chosen this programme of works by contemporary composers to illuminate and contextualise Beethoven’s extraordinary output for piano. In his explanatory note for the album, the pianist writes: ‘Just as a mountain peak is always surrounded by other perhaps less lofty but no less fascinating summits, the major works of Beethoven are not isolated rock formations rising from the desert, but, as it were, “Himalayas”, forming part of a range in which other mountains might be the best pieces by contemporaries such as Clementi, Hummel, Dussek, and Wölfl. These composers all knew Beethoven well and were in contact with one another. It is essential to know and to make known their music in order better to understand and more thoroughly appreciate the lingua franca of the music of the time, which in turn is part and parcel of the “spirit of the age”, and to be aware of that which unites them, as well as to recognise that which differentiates them and renders each unique. In this year of plentiful Beethovenian commemorations, it appears to me natural, indeed essential, to pay admiring and enthusiastic homage to these composers, each of whom, in his own way, followed his route to the summit.’
Recording: Potton Hall, Dunwich, Suffolk; 17 – 19 December 2019. Piano: Yamaha model CFX nine-foot Concert Grand Piano courtesy of Yamaha Music UK, Serial no. 6410300.