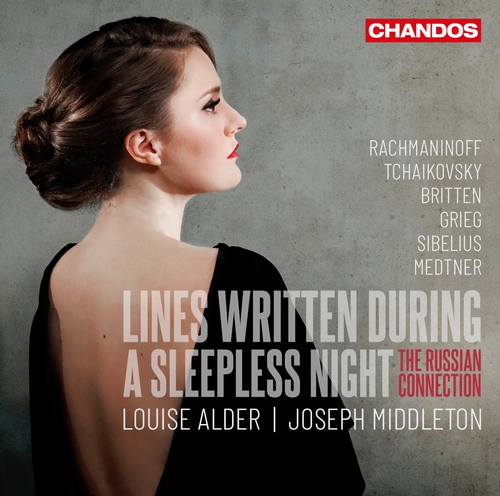 Benjamin Britten:
The Poet's Echo, Op. 76
The soprano Louise Alder has been described as 'the brightest lyric soprano of the younger generation' (The Arts Desk), 'a born actress' (Opera), and as having 'a voice of sparkling beauty' (Gramophone). In this her debut recording for Chandos, she and her pianist, Joseph Middleton, have devised an unusual but rewarding programme that explores the works of six contrasting composers. As she writes in her booklet note: ‘When Joseph suggested making a CD of Russian songs, including Russian composers who set poems in other languages, I jumped at the challenge. The more we discussed the repertoire, the more amazed I was to see how well it fitted with my own family history. In 1916 (the same year that Rachmaninoff composed the Opus 38 songs), huge political unrest forced my great-grandparents and family to flee, shutting up the house in Odessa, travelling 1,687 km north by rail to St Petersburg, and then by sleigh into Finland, through Norway, and back to Britain. It is my pleasure to be able to honour my family’s Russian connection with this meandering sleigh ride through Russia, with songs in Russian, French, and German, into Finland, in Swedish, and Norway, in German, back to the UK for a cycle of Britten songs in Russian.’
Recording: Potton Hall, Dunwich, Suffolk; 7 – 9 August 2019. Piano: Steinway Model D (serial no. 592 087) concert grand piano courtesy of Potton Hall.