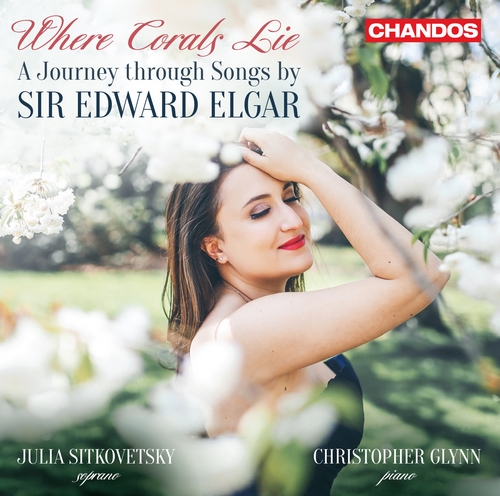 Sea Pictures, Op. 37 (Version for Soprano and Piano)
Sieben Lieder:
No. 7, The Shepherd’s Song, Op. 16 No. 1
No. 1, Like to the damask rose
No. 2, Queen Mary’s Song (‘The Lute Song’)
No. 3, A Song of Autumn
No. 6, Rondel, Op. 16 No. 3
Two Songs, Op. 60 - Folk-Songs (Eastern Europe, ‘Leyrisch-Turasp’), Paraphrased by ‘Pietro d’Alba’ and Edward Elgar
Pleading, Op. 48
Don Quixote - The Muleteer’s Serenade
The Self Banished
Speak, Music!, Op. 41 No. 2
After, Op. 31 No. 1
In Moonlight
Une voix dans le désert, Op. 77 - When the spring comes round (Quand nos bourgeons se rouvriront)
Pansies
Working in an era before Arts Council grants, public sponsorship, recording royalties, and long-term publishing deals, Elgar had to write for the public demand as much as personal satisfaction. The effort required for his large-scale works was rarely reflected in profitable income, so writing songs could be a useful way to earn money. The England of Elgar’s time favoured popular ballads, sung by well-known singers.

These were then sold as sheet music, the singer’s name emblazoned on the cover, for performances given in middle-class homes. There was little demand for lengthy song cycles, or song recitals consisting entirely of ‘serious’ repertoire in the German tradition. As a result, Elgar’s songs are often individual works, sometimes adapting instrumental works into songs (such as ‘Land of Hope and Glory’) when the commercial opportunities arose. Elgar also chose poetry that was popular and straightforward, rather than drawing on the established classical masterpieces. These songs were then transposed into numerous keys to allow performance by any voice type, designed for mass appeal and profitable sales.

Making her Chandos début, Julia Sitkovetsky is a British-American lyric-dramatic coloratura soprano with a flourishing, exciting international career. Having trained at the Guildhall School of Music and Drama, she made her professional operatic début at the age of sixteen, at Glyndebourne Festival Opera and English National Opera. Since then, she has appeared all over Europe. In the 2021 / 2022 season, she will return to Semperoper Dresden with her signature role, Queen of the Night, with which she will also make her house début at Komische Oper Berlin. With Roger Vignoles, Julia Sitkovetsky has given recitals at Wigmore Hall and Snape Maltings. In the summer of 2021, with her father, Dmitry Sitkovetsky, she performed songs by Shostakovich at the Internationale Schostakowitsch Tage Gohrisch in Dresden.
Recording: Menuhin Hall, The Yehudi Menuhin School, Stoke d’Abernon, Cobham, Surrey, 5 and 6 May 2021. Piano: Steinway Model D Concert Grand Piano (610 953) of 2020.