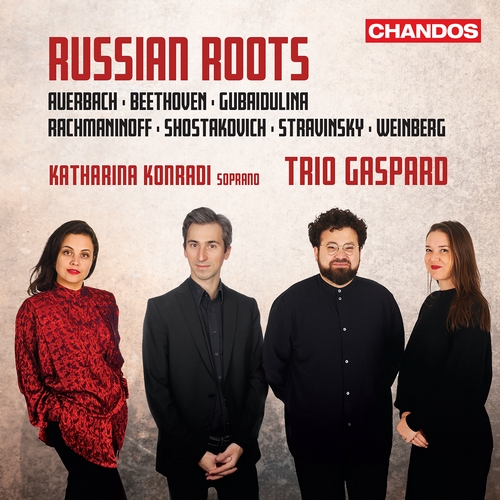 Lera Auerbach:
Postscriptum in G sharp minor
Russian Roots is the début recording of Trio Gaspard for Chandos Records, for which the group is joined by the soprano Katharina Konradi in a diverse and rewarding programme that explores the Russian influence across almost 200 years of music. A selection of Russian folksongs set by Beethoven, Shostakovich’s First Piano Trio and Seven Romances on Poems by Blok, and Weinberg’s Jewish Songs form the backbone of the recital. These are complemented by vocalises (wordless songs) by Stravinsky, Rachmaninoff, Gubaidulina, and Auerbach.

Katharina Konradi is the first soprano from Kyrgyzstan to have achieved an international career as a Lieder, concert, and opera singer. A BBC New Generation Artist, she won the Deutsche Musikwettbewerb in 2016 and became a member of Staatsoper Hamburg in 2018, where she sings the major soprano roles.

Founded in 2010, Trio Gaspard has become one of the most sought-after piano trios of its generation, whose members are praised for their unique and fresh approach to the score. The Trio is regularly invited to perform at leading concert halls throughout the world. It has an impressive history of international festival appearances, and each member also continues to pursue a successful solo career.
Recording: Potton Hall, Dunwich, Suffolk; 12 – 14 August 2021. Piano: Steinway Model D Concert Grand Piano (serial no. 592 087).