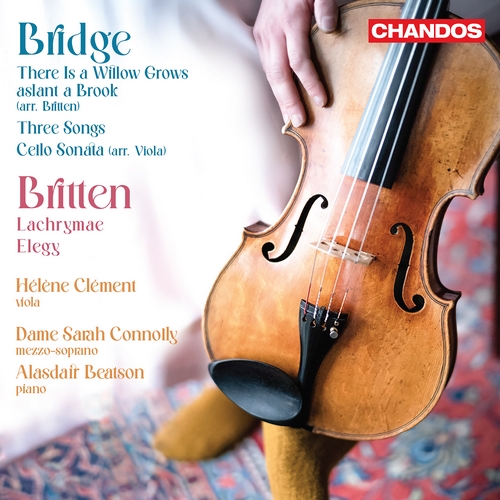 Benjamin Britten:
Elegy
Lachrymae - Reflections on a Song of Dowland, Op. 48
Hélene Clément, violist with the Doric String Quartet, is the current holder of the viola previously owned by both Frank Bridge and Benjamin Britten. Her ambition, quickly formed once she first played this instrument, has been to create a testament to both composers and to the instrument that binds them together.

This recording, in which Hélene is joined by the pianist Alasdair Beatson and Dame Sarah Connolly, is the realisation of that ambition. Hélene writes: ‘Frank Bridge owned and played the beautiful viola made by Francesco Giussani, in Italy, in 1843. Benjamin Britten was Frank Bridge’s most beloved pupil, and Bridge gave him the viola as a parting gift when Britten had to embark on a ship’s journey to the United States at the outbreak of the Second World War. The composers were never to see each other again. To record the viola repertoire of both composers, producing the very sound that they would have had in their ears, the sound that inspired their love for the instrument and its special language, became a priority for me.’
Recording: Potton Hall, Dunwich, Suffolk; 18 – 20 December 2021. Steinway Model D Concert Grand Piano (serial no. 592 087).