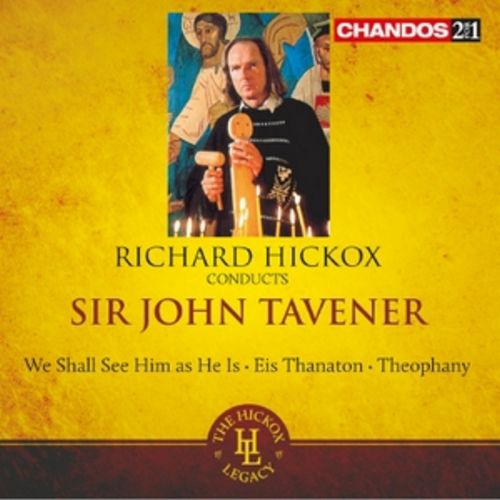 We Shall See Him as He Is
Eis Thanaton
Theophany
This two-disc set of choral works by Sir John Tavener forms part of the new and ongoing Richard Hickox Legacy series on Chandos, leading up to the fifth anniversary of the conductor’s death in November 2013. Next month (July 2012) we will continue the series with six further re-releases, including a selection of choral works by Dyson, Holst, Elgar, Howells, and Vaughan Williams, as well as a six-disc collector’s box set of orchestral works by Frank Bridge. All will be available at mid- or bargain price, on either the Chandos Classics or Chandos 2-4-1 labels.

The three works in this Tavener set reflect two major influences on the composer’s music: the culture of Greece, and the tradition of the Greek Orthodox Church. In the words of Tavener himself: ‘In everything I do, I aspire to the sacred… music is a form of prayer, a mystery.’ This manifesto is evident in the choral work We Shall See Him as He Is, which was recorded live at the BBC Proms in the Royal Albert Hall in London. The concert led Gramophone to the following conclusion: ‘an extraordinary work in an extraordinarily committed and spellbinding performance’. The Mumbai-born British soprano Patricia Rozario has made recordings of numerous works by Tavener, and she was in fact the composer’s own personal choice of soprano for this work, as well as for Eis Thanaton.

Eis Thanaton (Ode to Death) arose from personal tragedy: it is dedicated to the memory of Tavener’s mother who had died in 1985. Tavener describes the work as ‘an ikon of sorrow’, worked through as ‘part of a whole divine plan, not of death as an isolated cruel imposition’.

Tavener describes the orchestral Theophany as ‘an attempt to redefine the presence of God in all things as seen from the earliest days of creation to the Psalmist’. Mother Thekla, his friend and spiritual advisor, had a guiding hand in the shaping of the work, which was commissioned by the Bournemouth Orchestras to mark its centenary celebrations.
dawniej CHAN 9128 and CHAN 9440