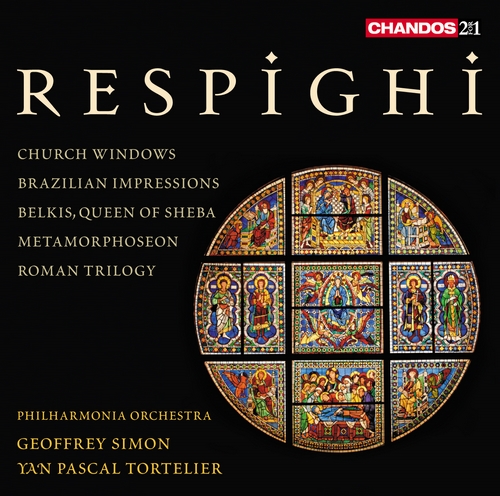 *Brazilian Impressions
The ‘Roman Trilogy’ is among Respighi’s best-known and best-loved works. Fountains of Rome and Pines of Rome are comprised of four distinct sections, each again depicting a particular fountain, or pine grove, in Rome, at a particular time of day. The final chapter in the trilogy, Roman Festivals, is inspired by, as the title suggests, four Rome-based festivals.

Respighi based his Church Windows on Three Piano Preludes on Gregorian Melodies. The preludes were published in 1922, and orchestrated three years later, Respighi adding one further movement, making it a four-piece symphonic suite. Each of the individual movements was given an appropriate sub-heading, illustrating a biblical or religious scene that might have appeared in actual stained-glass windows. The first movement, for instance, is slow and stately, its constant forward moving accompaniment suggesting ‘the passing of a chariot beneath a brilliant and starry sky’, hence the name ‘The Flight into Egypt’.

Brazilian Impressions took its inspiration from the composer’s colourful and vibrant memories of a trip to South America. The opening movement is a deeply atmospheric nocturne, depicting dance rhythms and folksongs heard in the distance on a warm, tropical Brazilian evening. A less pleasant memory perhaps is recalled in the second movement, namely a visit to the Butantan Reptile Institute, the sliding movements and angry whirring of the rattle-snakes perfectly depicted in the music.

The ballet score for Belkis, Queen of Sheba evokes the wondrous journey undertaken in the year 1000 B.C. by Belkis, the Queen of Sheba, in response to an imperial message from Solomon, the King of Israel. The full eighty-minute ballet required an enormous orchestra including such unconventional instruments as sitars and wind machines, a chorus and vocal soloists, and a narrator to relate the story in verse. Two years after completing the ballet score, Respighi extracted a purely orchestral suite, which is recorded here.

Metamorphoseon, commissioned by Serge Koussevitzky to mark the fiftieth anniversary of the Boston Symphony Orchestra in 1930, consists of twelve variations, or ‘modes’. The day after the work’s premiere performance, The Boston Traveller wrote: ‘...a colossal achievement... His is a rare genius for melody, an absolute technical command and above all, brilliant orchestration.’