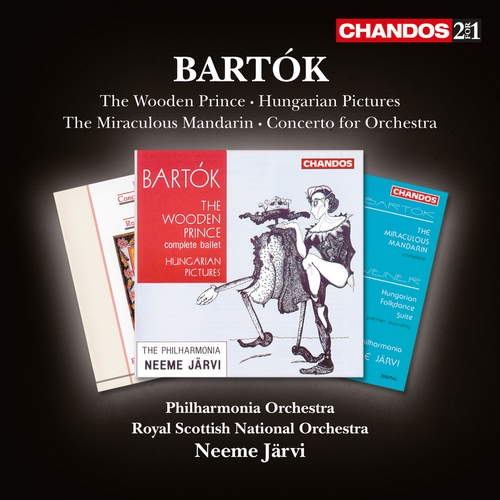 The Miraculous Mandarin*
The Wooden Prince*
Hungarian Pictures*
Concerto for Orchestra†
This ‘2for1’ reissue brings together the best performances by Neeme Järvi of the music by Bartók, taken from his extraordinarily prolific recording career with Chandos Records. The four works span Bartók career and include some of the greatest music he ever wrote.

The Concerto for Orchestra has remained one of Bartók’s most popular orchestral works since its triumphant premiere in 1944. Its title signals that each section of instruments is treated in a soloistic and virtuoso way. According to Bartók himself, ‘the general mood of the work represents, apart from the jesting second movement, a gradual transition from the sternness of the first movement and the lugubrious death-song of the third, to the life-assertion of the last one’.

The ballet The Miraculous Mandarin is heard here in its complete form. Set in a seedy urban underworld, it tells the tale of a prostitute, the three thugs that control her, and their mysterious encounter with the eponymous Mandarin. In portraying this scenario Bartók creates an astonishingly vivid score with some of the most colourful music he ever wrote.

The Wooden Prince, an earlier ballet, could not on the surface be further from The Miraculous Mandarin. Lacking its daring modernism, it instead shows the influence of Debussy, Strauss, and Wagner. However, its outwardly sunny character obscures a strange and surreal undertone.

The Hungarian Pictures are skilful and imaginative orchestrations made in 1931 of five earlier piano pieces. Each with its own distinct character, these pieces give the impression of being an authentic folksong arrangement, although this is true only of the last of the five.