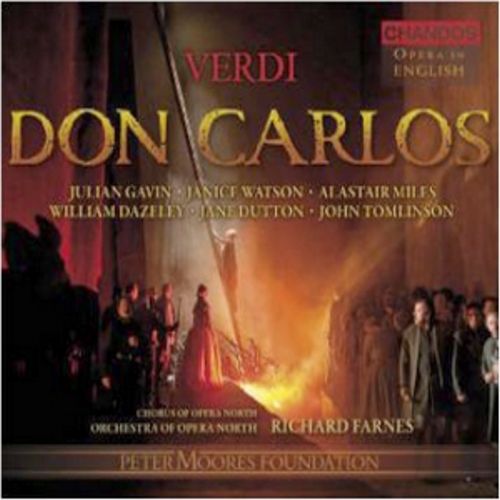 intense personal passion and pain, enmeshed in the web of political and religious agendas – utterly relevant

to today and superbly expressed in a score of gripping intensity.

receives its first recording in English. The performances conducted by their Music Director, Richard Farnes,

knocked everyone who witnessed them, sideways.

The Observer thought ‘The work came alive as never before, its passionate exchanges between king, son,

stepmother and loyal friend all the more incandescent, an endorsement for the Peter Moores Foundation

‘This is a drama torrid enough to satisfy the senses on many levels,’ whilst The Spectator declared Richard

Farnes, ‘the best Verdian of our time.’

Tenor Julian Gavin takes the lead of Don Carlos and is ably assisted by William Dazeley as Rodrigo, Janice

Watson as Elizabeth, and Alistair Miles as Philip II and Sir John Tomlinson as the Grand Inquisitor.