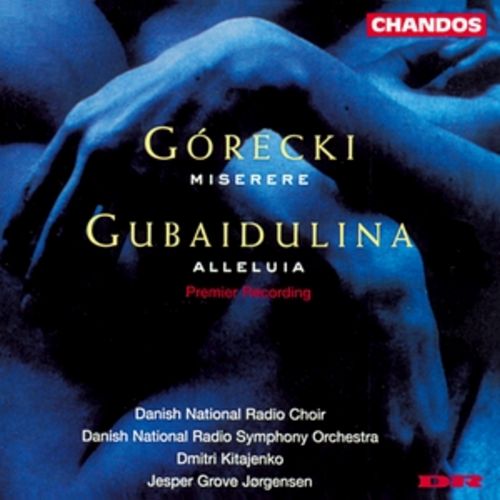 Gubaidulina:
Alleluia, for choir, boy soprano and orchestra
In the last quarter of the twentieth century our perception of the musical repertoire has been transformed through the compact disc, with its broad dissemination of works of every style and period. Along with other developments in the actual art of composition, this change has altered the way we think of such words as ‘modern’ and ‘avant-garde’. Composers today are familiar – and can count on their audience to be reasonably familiar also – with idioms and techniques current as long ago as the early Renaissance and the Middle Ages. They also have at their disposal the traditions of other cultures than those associated with western Europe

This new pluralism of sources is at once an opportunity and a danger for a composer. If he or – pertinently for this recording – she is to develop an individual voice, it must be done against a much more varied background than the relatively narrow musical world known to the classical and romantic masters. Sofia Gubaidulina has expressed her view of this task with telling conviction:

I regard the ideal relationship to tradition and to new compositional methods as one in which the artist has mastered all methods, new and traditional alike, but in such as way as to appear to be paying attention to neither one nor the other… The world that I apprehend is like the roots of a tree, and the work that grows out of it constitutes its branches and leaves. They can indeed be described as new, yet they are still leaves, and from that viewpoint they are always traditional and old

The Pole Henryk Miko/ laj Górecki has succeeded, as strikingly as Gubaidulina, in relegating conventional ideas of what constitutes ‘modernity’ to the level of irrelevance. Górecki was only a child when he went through the trauma of Nazi occupation. Like his compatriots of the previous generation, Panufnik and Lutos / lawski, he then had to undergo another form of totalitarianism for forty years in Soviet-dominated Poland. Perhaps it is the absence of an adult preCommunist perspective that gives Górecki’s intensely personal music its curious blend of expressive directness and alienation: he often sounds not merely like a post-modern composer but almost like a post-nuclear one, speaking to us from a desolate world endowed with all the warmth and the creaturecomforts of Diogenes’s tub. After a youthful flirtation with ‘advanced’ writing in his student days, Górecki turned in a radically and paradoxically new direction – the distant past – with the Three Pieces in Old Style of 1963. Instinct with a spirit of unadorned medieval simplicity, Górecki’s later works owe their unusual breadth to a firmly based harmonic sense. This stems from modal sources, common to both church and folk music, that predate the tonal dynamism of the classical key system. Uninterested in compromise, Górecki achieves a genuinely static style whose sheer conviction derives from its integrity. There is no factitious thrashing-about here, only a luminous strength that is at once impassioned and calm.

At a first glance, Gubaidulina’s taste for broad structural spans, medieval monody, and the plainest of harmonic progressions may seem to ally her to Górecki. Furthermore, the works juxtaposed in this recording share several obvious features. Both are self-evidently devout settings of sacred texts. Both employ chorus (though in Gubaidulina’s case with boy soprano solo and orchestra, and with an optional part for a colour organ such as Scriabin conceived for his Prométhée). Both begin on a low A, with soft incantations for basses along the lines of medieval chant. Both treat few words to expansive musical elaboration: Górecki does not even reach the fourth and last words of his five-word text till after about half an hour, and the first five of Gubaidulina’s seven movements are devoted to the single word of her title.

Yet there is a difference between the two composers more significant than their affinities: Gubaidulina’s style is essentially dramatic, whereas Górecki’s is fundamentally hieratic. Górecki is like one of those people – we probably all know someone like that – whose extremely quiet manner of speech cloaks, or rather betrays, a formidable inner anger. What makes his late works so impressive is the philosophical calm with which they replace the more superficial expression of that anger to be found in his early avant-garde music.

Górecki wrote Miserere in 1981 and dedicated it to the city of Bydgoszcz, where some of the worst clashes between Solidarity activists and the security forces had taken place, involving serious injury to several union members. For six years, the work had no chance of performance. When it was eventually premiered, in St Stanis / law Church in W/ loc / lawek on 10 September 1987, the authorities prevented any public announcement of the event – but every seat was occupied. An astonishingly controlled arc of expression on the largest scale, the work begins with a succession of entries building from the lowest to the highest of the choir’s eight voice-parts (rather like the first movement of the composer’s Third Symphony, but with each part this time given a different melody). It avoids the slightest hint of overt dramatic gesture. There are outcries of passionate entreaty near the end, but perhaps the two most illuminating moments come at the opposite end of the dynamic scale, when the second basses descend for the first time to a soft low E, and then even more thrillingly just before the end when they go one tone lower still to D in a passage marked ‘imploringly’.

Gubaidulina was born in Chistopol in the Tatar Republic. Like Górecki, she passed her early maturity under a totalitarian regime that thought itself qualified to issue directives to artists. Like him, again, she has emerged as an international leader in her generation only within the last two decades, helped, in her case, by the support of the violinist Gidon Kremer, for whom she wrote her large-scale concerto, Offertorium. Alleluia was composed in 1990 in response to a commission – under the general heading ‘Singing in Honour of God’ – from the Berlin Festival, at which it was premiered on 11 September 1990.

The work is scored for a large orchestra, with percussion calling for six players and several keyboard instruments including amplified harpsichord. In contrast with the lapidary style of Górecki’s Miserere, it proceeds by way of frequently violent contrasts of tone, texture, and material, punctuated by contributions from a variety of solo woodwind and brass instruments and by volcanic ejaculations from the massed strings. After five movements centred on the single word ‘Alleluia’, the sixth stresses ‘vjeruju’ (the Russian equivalent of ‘credo’ – ‘I believe’) in the course of building to an overwhelming climax. The seventh and last movement praises God in the serene tones of a boy soprano, and the work ends even more quietly, and much more peacefully, than it began.