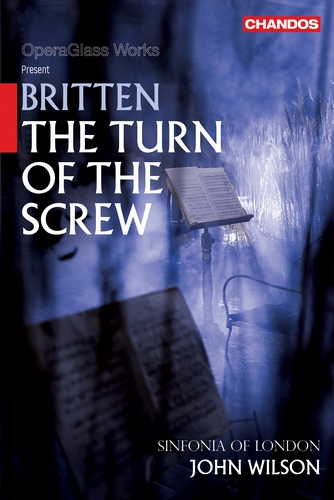 Britten: The Turn of the Screw

Chandos - CHDVD 5290
Kompozytor
Benjamin Britten (1913-1976)
Wykonawcy
The Prologue - Robert Murray, tenor
The Governess - Rhian Lois, soprano
Miles, Flora (children in her charge) - Leo Jemison, treble
Mrs Grose (the housekeeper) - Gweneth Ann Rand, soprano
Quint (a former manservant) - Robert Murray, tenor
Miss Jessel (a former governess) - Francesca Chiejina, soprano
Sinfonia of London / John Wilson
The Turn of the Screw, Op. 54
An Opera in a Prologue and Two Acts
Libretto by Myfanwy Piper
Henry James’s novella The Turn of the Screw has become notorious as at once the most stylish and elusively ambiguous of all nineteenth-century ghost stories. In June 1932, the eighteen-year-old Benjamin Britten heard a radio adaptation of James’s story and noted in his diary that it was ‘wonderful, impressive but terribly eerie & scary’. He read the novella for himself in January the following year, telling his diary that he still found it ‘glorious & eerie’ and judging it to be an ‘incredible masterpiece’. His subsequent operatic setting is unequivocally a masterpiece, and is here seen in a first-class production made for television with an outstanding cast led by Robert Murray and Rhian Lois, accompanied by Sinfonia of London, and conducted by John Wilson.

Originally planned as a run of live performances, subsequently cancelled because of the Covid-19 pandemic, the production was quickly transformed into a film for television with spectacular results.
Filmed on location at Wilton’s Music Hall, London, on 10 – 17 October 2020. Orchestra recorded at Cadogan Hall, London, on 2 – 6 November 2020.