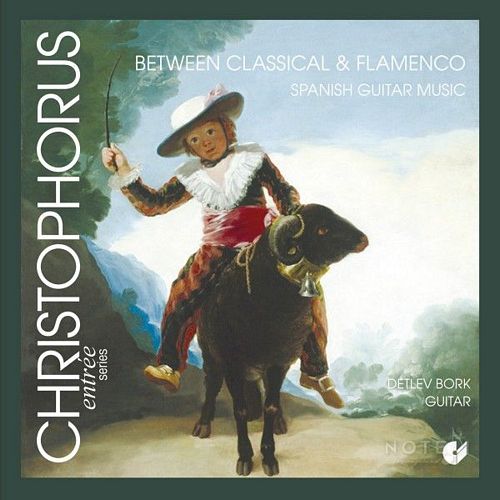 ... The division between the styles and the supposed 'liberation' of Classical guitar from the 'folkoriented'

Flamenco was urged on by no less a person than Andrés Segovia, who largely shaped

the course of guitar music after 1945 and left his mark upon it. This division had little to do with

developments in Spanish guitar music in the 19th and early 20th centuries, however, and the result

of Segovia's 'reforms' was that a whole repertoire of 'stylistic hybrids' fell into obscurity.

Detlev Bork is one of the few guitarists with a command of both styles, having learnt both the

Classical and the Flamenco guitar since childhood. As a collector and supreme connoisseur of

Spanish guitar music, he has made his CD into a platform for unknown works (a third of them

premiere recordings) from this neglected 'hybrid' tradition. There will also be particular interest in

the well-known pieces "Fandanguillo", "Rafaga" and "Sevillana" by Joaquín Turina, which Bork

performs from the composer's original manuscripts - without Segovia's numerous 'improvements' -

thus restoring three classics of the repertoire to their original form.