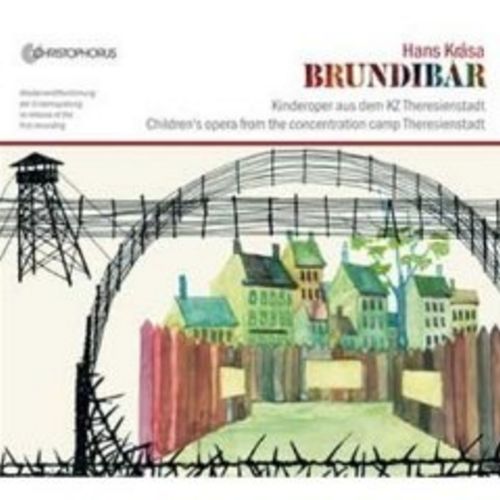 Schwenk:
Theresienstadt-Hymne (1942)
Hans Krása (1899 Prague-1944 Auschwitz) was a Czech composer who perished in the Holocaust. He helped to organize cultural life in Theresienstadt concentration camp. Brundibár, a children's opera based on a play by Aristophanes, was the last work Krása completed before he was arrested by the Nazis in 1942. Krása was sent to the Theresienstadt ghetto where he reworked Brundibár for the available forces, which was then performed 55 times in the camp and also features in the infamous propaganda film made for the Red Cross in 1944. In the chequered history of Brundibár it lay forgotten for several decades. A reappraisal was said to have started first at the end of the 1970s. While investigating her family history, the Benedictine nun and music teacher Maria Veronika Grüters, rather accidentally, came across the material of the opera. Showing great commitment she staged Brundibár with her student ensemble in German. The Benedictine nun orchestrated the children‘s opera for her student orchestra from the piano score, which was in the Czech or Hebrew language, and wrote a German libretto. The German premiere finally took place in July 1985 at the St. Ursula Secondary School in Freiburg. Sister Veronika Grüters also travelled to Israel with her production. In May 1986 the piece was given in the Kibbuz Givat Haim Ihud, in Tel Aviv and twice in Jerusalem. The present recording was made in December 1986 as a co-production of Christophorus and Südwestfunk Freiburg, and is the first recording of the children‘s opera Brundibár to be broadcast – then issued as an LP, which we now present on CD for the first time.