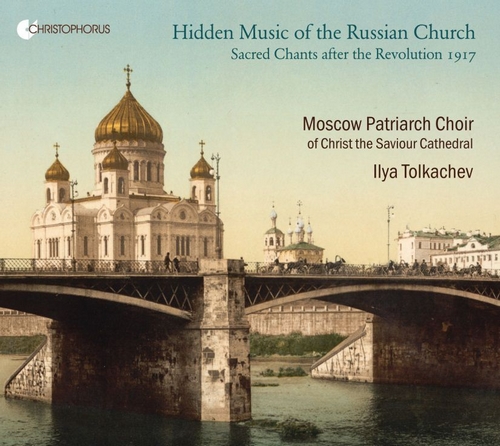 Hidden Music of Russian Church - Sacred Chants after the Revolution 1917 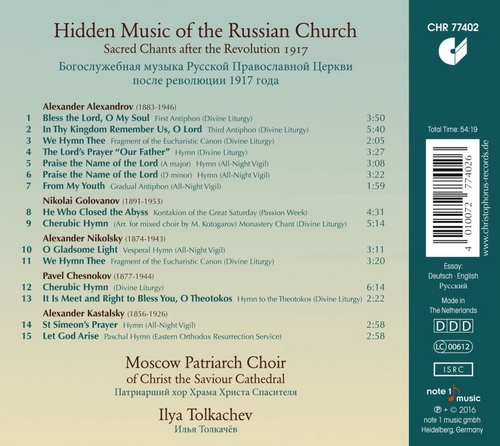 The Patriarch Choir of the Christ the Saviour Cathedral in Moscow conducted by Ilya Tolkachov devotes the second of their CDs issued by Christophoros to Russian sacred music composed after the 1917 Revolution. Under the Soviet regime, most churches and the majority of monasteries were closed and the priests and monks expelled; ecclesiastical life became extremely difficult and was permanently under threat of reprisal. Numerous celebrated composers of sacred music were only permitted to publish secular compositions, but continued to work in secret. It is these hidden compositions which the Moscow Patriarch Choir would like to bring to light. The composers featured include prominent Russian personalities such as Golovanov, the director of the Bolschoi Theatre, and Alexandrov, the composer of the Russian national anthem (still sung today). It is highly symbolic that the Moscow Patriarch Choir has devoted itself to this task as the Christ the Saviour Cathedral is itself a reflection of political developments and their consequences for the Russian Church. Consecrated in 1883 as a new centre for the Russian Church (under the musical direction of Rimski-Korsakov and Balakirev), the building was blown up under Stalin’s rule (he had plans for the construction of a gigantic Soviet palace on the same site) and reconstructed according to the original plans in the 1990s during the era of Perestroika thanks to donations by the Russian people. Today, the cathedral is the seat of the Russian Orthodox patriarch Kyrill and the centre and symbol of the reinvigorated Russian Church.