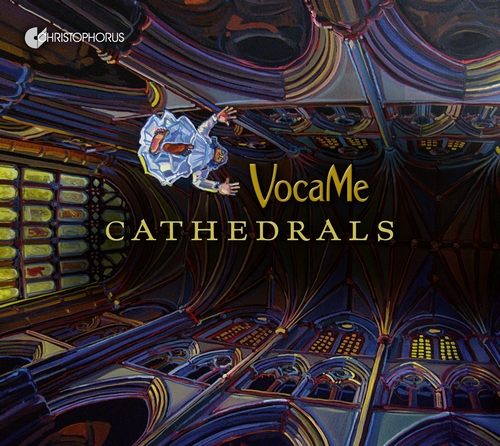 Tota pulchra es
Ave gloriosa
Sol sub nube latuit
Messe de Tournai
Maria, stella maris
Benedicamus
Baculi sollemnia
Cuncti potens
Deus Pacis
Salve mater salvatoris
Orbis factor
Audi pontus
Congaudeant catholici
Circa mundi vesperam
Spreading throughout Europe from the 12th century onwards, the vast Gothic church spaces, like wonders of stone suffused with light, inspired the Ensemble VocaMe to produce this CD. Four female singers with an enchanting fusion in unison and large spectra in polyphonic singing, along with the tonal colours of multi-instrumentalist Michael Popp, represent the musical extension and interpretation of the church space. The program consists of sacred music that evolved up to the Gothic period. At its center is the Tournai Fair held in the 14th century. It is regarded as the earliest testimony of a mass which was entirely set to music, as evidenced by medieval manuscripts.

During the Gothic period, Paris and its cathedral were one of the most important cultural centers from whence the new Gothic spirit spread throughout Europe. The intellectual elite of this period gathered around its large cathedral and many new compositions of the 13th century emanated from this environment, the so-called “Notre Dame School”. The compositions, like the Tournai Mass, are part of a high culture of music – music that could probably only be heard in the great cathedrals.

VocaMe combines this with more folk-like or modest melodies from the Codex Calixtinus (book of Saint James) and the Las Huelgas Codex, among others. Thus, a Gothic soundscape emerges, ranging from simple monophony to the splendour of medieval polyphony.
Recording: March 2018, München (Germany).