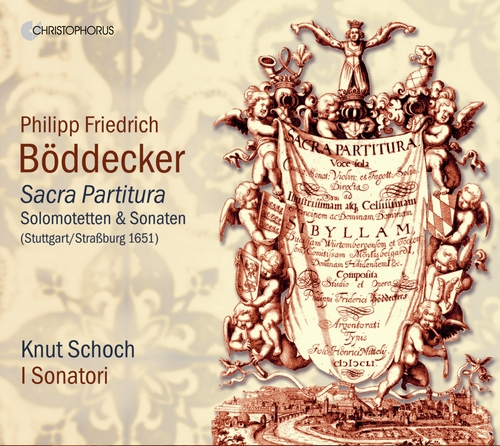 Samuel Friedrich Capricornus:
Sonata in e
At the Collegiate Church in Stuttgart, the largest regional church in Württemberg (South Germany), and burial site of the Dukes of Württemberg, who lived in the neighbouring castle, a new organist was appointed in 1652: Philipp Friedrich Böddecker (1607-1683). His Sacra Partitura, a collection of eight motets and two sonatas, was printed in Strasbourg in 1651, when his negotiation with the church council had already begun. These compositions might have been decisive for Böddecker’s appointment, particularly as the composer dedicated the collection to the Duke’s musical sister, Duchess Sibylla.

The music is composed in typical concertante style, but influenced by Italian monody and Monteverdi’s seconda pratica. In his preface, Böddecker informs us that he would have “preferred to publish a work with more voices than just a voce sola”, but was forced to comply with the specifications of the “coffers” and the publisher in the troubled times after the Thirty Years’ War. The compositional technique is not, however, a makeshift solution. On the contrary, Böddecker’s fine works fit into a style of music which had increasingly been flourishing in German-speaking regions since the first half of the century: the sacred concerto for small ensemble, placing a virtuous melody with great emphasis on the text above a richly scored basso continuo group.
Recording: 22-24 October 2018, Sendesaal Bremen (Germany). Instruments: Violine: Joannes Georgius Thir (fecit Viennae, anno 1763); Cembalo: Reinhard Steller (1988, nach Carlo Grimaldi 1697); Viola da gamba: David Rubio (Cambridge 1980)