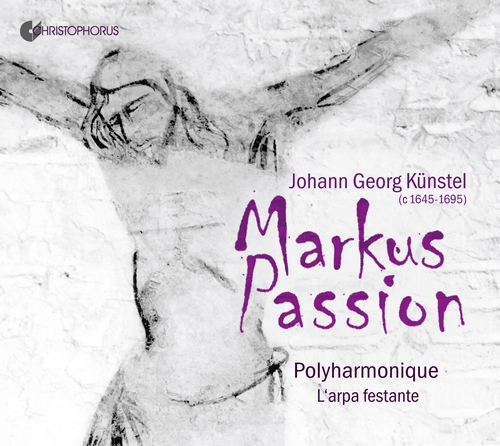 CD 2:
Karfreitag:
Teil I
Teil II
The 17th century composer Johann Georg Künstel is one of the forgotten persons in history. He lived at Franconia in South East Germany where he is mentioned as a schoolmaster and court organist. But his inclusion in Johann Gottfried Walther’s Musicalisches Lexicon of 1732 provides clues about his significance. The St Mark Passion can be considered to be his most significant work; records show that it was frequently performed in Coburg even after the composer’s death. The work’s substantial dimensions of nearly two and a half hours(!) which is outstanding for this time is due to the fact that the complete performance was divided between several church services between Maundy Thursday and Good Friday. The music is really pleasant; the long recitatives of the Evangelist are formed with pleasing melodies and are continuously accompanied by strings. Most of the text is narrated by the vocal consort or parts of it, often interrupted by instrumental intermezzos. On first glance, the St Mark Passion seems to be straightforward, everyday music ideally suited for choirs, but a closer examination reveals that the work is actually a sophisticated, through-composed musical drama. From the introductory sonata to the concluding chorale, Künstel creates an enthralling musical arc, immediately drawing the audience into the passion of Jesus.
Recording: 15-18 May 2018, Schloss Seehaus, Kapelle (Markt Nordheim)