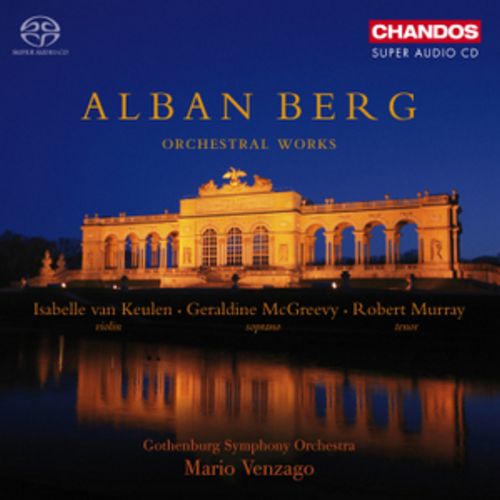 Piano Sonata, Op. 1 (1908)
Three Pieces, Op. 6 (1914-15, revised version 1929)
Der Wein (1929)
Passacaglia (1913)
Concerto for Violin and Orchestra (1935)
Three Fragments from 'Wozzeck' (1923-24)
Symphonic Pieces from the Opera 'Lulu' (1934)
Der Wein (1929)
Wein, Weib und Gesang!;
This comprehensive collection, performed by the Gothenburg Symphony Orchestra (the National Orchestra of Sweden) under its former Principal Conductor Mario Venzago, is released on two Surround-Sound hybrid SA-CDs. It is the only available Berg collection on SA-CD and sold at the price of a single SA-CD.

The Gothenburg Symphony Orchestra recently made its debut on Chandos with a disc of concertos by Weinberg, which was widely praised.

The works on the present SA-CDs span Berg?s creative career from his first published piece, the Piano Sonata, Op. 1, here performed in the orchestration by Theo Verbey, to the Violin Concerto and the Symphonic Pieces from the Opera ?Lulu?, the last works that were fully completed when Berg died at the age of fifty in 1935.

The Dutch violinist Isabelle van Keulen performs the Violin Concerto, for which she is well known. The Cincinnati Enquirer wrote last year: ?Van Keulen brought Manon Gropius vividly to life in the concerto, matching her tone and expression to each episode; flighty and cheerful in the first, plucky and aggressive in the second, serenely resigned at the end, where Berg quotes a Bach chorale. The enigmatic folksong woven into both movements (hardly Bachian with its risqué text) had a mysterious feel, and van Keulen tied it all up in a performance as narrative as it was nimble.?

'The orchestration of the Piano Sonata by Theo Verbey gives us a virtually new piece. The impact of the brilliantly idiomatic scoring makes it a quite different affair from the work played on the piano, and is a real addition to the repertoire? Thanks to the lucid conducting of Mario Venzago, the magnificent and fearless playing of the Gothenberg Symphony Orchestra, and a Chandos recording which combines clarity and enormous weight, this set represents an outstanding addition to the catalogue, and a to some extent fresh approach to this intense oppressive music.'