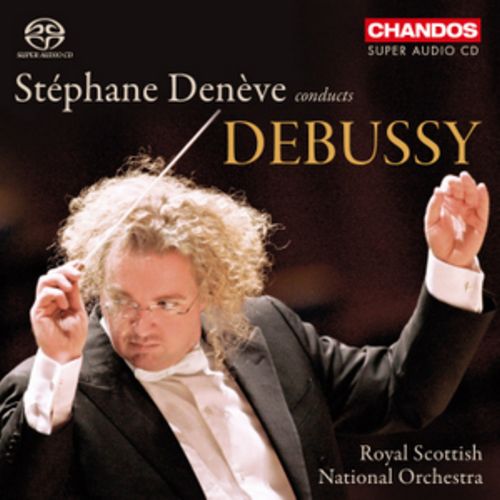 Prélude and Cortege et Air de danse from L’Enfant prodigue
Printemps
Prélude a l’apres-midi d’un faune
Marche écossaise sur un theme populaire
Nocturnes
La Mer
Images
Berceuse héroique
Jeux
Recognised internationally as a conductor of the highest calibre, Stéphane Deneve took up the post of Music Director of the Royal Scottish National Orchestra in 2005, and has since attracted attention from audiences and critics alike. This May, the conductor bids a fond farewell to Scotland and the RSNO with a series of ‘Au Revoir’ concerts, and of course, this disc of orchestral works by Debussy.

After the impact made by the production of Pelléas et Mélisande in 1902, the next orchestral work by Debussy was awaited with intense interest. La Mer did not disappoint, and is today widely considered to have been crucial in its influence on twentieth-century music. After completing this work, Debussy spent no fewer than seven years wrestling with what were to become Images for orchestra. Some critics were puzzled by the work and suggested that Debussy’s talent might have dried out. They were promptly put right in an article by Ravel, who accused them of ‘slowly closing their eyelids before the rising sun amid loud protestations that night is falling’.

With a sultry flute solo, Prélude a l’apres-midi d’un faune opened an astonishing new world for western music. Debussy based this composition on a poem by Mallarmé, who wrote to the composer: ‘I have come from the concert, deeply moved: A miracle! that your illustration of L’Apres-midi d’un faune should present no dissonance with my text, other than to venture further, truly, into nostalgia and light…’

The three Nocturnes feature some of Debussy’s most imaginative orchestral writing. In the words of the composer, ‘the title Nocturnes is… not meant to designate the usual form of a nocturne, but rather all the various impressions and the special effects of light that the word would suggest’. Debussy provided descriptions of the three movements. ‘Nuages’, for example, depicts ‘the slow, melancholy procession of the clouds, ending in a grey agony tinged with white’, and also the experience of standing ‘on the Pont de Solférino very late at night. Total silence. The Seine without a ripple, like a tarnished mirror’
Release Date 30 Apr 2012